High chance of inflation falling below 1% in 2015 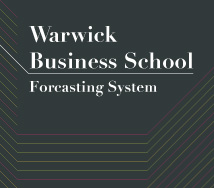 There is close to a one-in-two chance that inflation will breach the Bank of England’s target range and fall below one per cent in 2015, according to the newly launched Warwick Business School Forecasting System (WBSFS).

The WBSFS also predicts that the UK economy is most likely to grow between three and four per cent per annum in 2015, following GDP growth of around three per cent in 2014. But there is close to a one-in-four chance that growth will be less than two per cent in 2015.

Instead of using a single forecasting model or relying on the judgement of the Bank of England’s Monetary Policy Committee the WBSFS combines five state-of-the-art econometric models to produce judgement-free macroeconomic forecasts for UK GDP growth and CPI inflation.

The graphs above presents the latest (as of November 26) probabilistic forecasts for real GDP growth and inflation – for 2014 and 2015 – as histograms.

Commenting on the latest Warwick Business School forecasts, timed to coincide with publication of the latest GDP data from the ONS, Professor James Mitchell, of the Economic Modelling and Forecasting (EMF) Group at WBS, said: “The risks to a breach of the Bank of England’s inflation target in 2015 remain high – close to a one-in-two chance.

”This is because, according to our judgement-free forecasting system, the probability of inflation falling below one per cent in 2015 has risen sharply - from 13 per cent a quarter ago - to the current expectation of 42 per cent.

“This follows UK inflation recently falling to five-year lows due to weaker oil, food and import prices; and is consistent with continued stagnation and possible deflation in many of the UK’s export markets. Business and policymakers should remain alert to these downside risks; accordingly, we do not expect the Bank of England to change the Bank Rate any time soon.”

Professor Ana Galvao, of the EMF Group at WBS, said: “The latest GDP data for 2014Q3 from the ONS confirms that the economic recovery in the UK continues. Warwick Business School’s forecasts, which condition on these latest GDP data from the ONS, show that looking forward to 2015 the most likely outcome is for annual growth to continue at between three and four per cent.”

But Professor Anthony Garratt, of the EMF Group at WBS, added “There are downside risks to economic growth prospects in 2015. There is close to a one-in-four chance that growth will be less than two per cent in 2015. This suggests that one cannot presume annualised growth will pick up to historically 'normal' levels of growth of around 2.5 per cent.”

The recently launched Warwick Business School Forecasting System is a University of Warwick based initiative to place impartial, academically robust macroeconomic forecasts in the public domain. Click here to find out more about it.