Intelligent conservatism: Play safe to get to the top 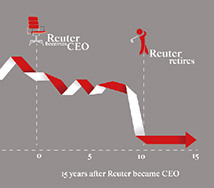 CEOs have become like football managers, and considered stars in their own right, but Ashley Potter talks to Christian Stadler on a new style of leadership

Think of a business leader to emulate and you will probably think of Richard Branson, Jack Welch or Steve Jobs.

They are seen as charismatic and inspiring characters who have seemingly single-handedly created a business dynasty through their vision and determination.

Books on Branson and Jobs sell like the proverbial hot cakes, but according to Christian Stadler they are not the business leaders we should be following.

After an exhaustive study of 100-year-old European corporations, Stadler found that the CEOs and leaders who had contributed to this longstanding success were not charismatic; there was no magnetising character or inspiring words to push, drag and bully the company to the top of its industry.

No, Stadler found that the overriding trait of these people that have helped build some of the world’s biggest companies was ‘intelligent conservatism’. It is not the kind of revelation that will help those CEOs sell many books or even attract many headlines, but it is the kind of safe - whisper it - almost boring, characteristic that companies value and leads to success.

Instead of following Jobs and Welch or Nike co-founder Phil Knight you should look at those bosses running established 100-year-old companies like French cement and aggregates firm Lafarge or pharmaceutical giant GlaxoSmithKline, not a sexy young tech company like Apple or Facebook.

At these corporations you will find executives like Lafarge senior vice president Keith Daton or Hans-Jurgen Schinzler, CEO of German insurance giant Munich Re, immersed in safe, undramatic reasoning. There won’t be a list of 10 inspiring quotes from these business leaders, but there will be 10 pragmatic reasons behind their success.

Stadler, a Professor of Strategic Management at Warwick Business School, says: “The problem with somebody like Jobs is that he is one in a million. These sort of people attract all the headlines and media interest, so it is easy to think business leaders should be charismatic, inspiring and full of great speeches.

“For a start these sort of people are hard to find and the chances of finding somebody with charisma that also possesses business acumen is relatively low.

“When we looked at the leaders of these long term high-performing companies we didn’t find many who were charismatic and they were less likely to be charismatic than those in charge of lower performing firms. These companies go for a safer bet; it is how companies behave in the long run, they are a bit careful and they don’t need to be at the very leading edge.

“Occasionally a charismatic leader will pop up, but the majority of the the leaders of these highly successful and enduring companies have a style of leadership that we call ‘intelligent conservatism’.

“Those charismatic leaders can be great, but if they get it wrong people follow them because they are so convincing - like Dick Fuld.”

The Gorilla of Wall Street was renowned for his belligerent and militaristic style of leadership that demanded total loyalty. He dragged Lehman Brothers from nowhere, when it was spun off in 1994 from American Express, to one of the biggest players on Wall Street, making $4.2 billion (£2.57 billion) profit in 2007.

But when the financial crisis struck Fuld led Lehman Brothers into the abyss by refusing to sell assets until it was too late. As the crisis deepened CEOs were felled at rivals Bear Stearn, Merrill Lynch and Citigroup, but a Board beholden to Fuld left him to steer them into deeper trouble. With losses stacking up to $2.8 billion (£1.71 billion) for the second quarter in 2008 the US Government decided not to step in and save it, and it was forced to file for bankruptcy.

“Fuld’s charisma, that had created Lehman Brothers also proved its downfall. He had become synonymous with the company and the Board failed to challenge him when things were going wrong,” says Dr Stadler.

“Charisma is very persuasive. I met Edzard Reuter, CEO of Daimler in the 1980s, in a coffee shop in Berlin. Within an hour he would convince you that the world is flat, but he made some disastrous moves with Daimler. He thought the future for luxury cars was bleak so he wanted them to diversify. He moved Daimler into integrated technology, aerospace, defence and consultancy. He was able to bring everybody on board to follow this plan, but it ended up landing Daimler the largest loss by any German company since the end of the second world war of around $4.2 billion (£2.55 billion).

“He was such a strong character, he just pushed things through. They bought companies grossly over-priced, overlooked details - it was really painful. Charisma is not a bad thing, but it has a greater risk associated with it.”

Humility, plus an in-depth knowledge of their sector and company are important features of intelligent conservative leaders.

“A common theme is that they climbed the ladder, working their way to the top of the business,” says Stadler. “In our study of long-lived corporations 97 per cent of CEOs were promoted from within. That is so important, because it is very lonely at the top. CEOs will have a lot of people around them trying to please them, who will simply confirm their opinion, rather than challenging it, so it is hard to have a sense of what is going on.

“Somebody who has worked their way up has the ability to reach further down in the organisation, and they can connect with those different departments and people.”

Another trait of these leaders is their ability to listen. It may take a long time, but listening to the many opinions in a company ensures everybody is on board.

“Listening means these leaders are not as reckless and take their time to research,” says Stadler. “They have the ability to be humble, it is not just about their ambitions, they have the good of the corporation in mind. So they make decisions that are not the most applauded from the outside world, but it is for the long term good of the company.

“At Lafarge we were able to document the determination of managers to learn from their staff as early as 1833.

“Léon Pavin de Lafarge, the second leader of the young corporation, for example, spent considerable time at the plant to learn more about production from the workers, a practice that was picked up by some of his successors.”

The star CEO has become like a football manager, the focal point of the corporation, who can be questioned and analysed. But Stadler’s research questions whether companies really need a single person at the top in charge.

“Until 2008 Royal Dutch Shell did not have a CEO,” says Stadler. “The outside world always hated that, but the fact they continued to be one of the most successful oil companies in the world, proved it was a good recipe.

“They had a brush with disaster, when Henry Deterding was solely in charge and was developing a positive view of Nazi Germany. When they reorganised in the 1950s they remembered this and decided to have a group in charge. There was much more collective decision-making and it worked very well.”

So, don’t think Jobs, think ‘intelligent conservatism’ to get the top job.