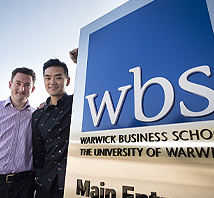 Current Distance Learning MBAs were reunited at WBS after 21 years. Charles and Sunni were students at West Buckland School (also known as WBS!) in North Devon, and although they’ve both led very different lives, working in different sectors and countries, the Distance Learning MBA has brought them back together. We caught up with them both during Warwick Week to find out more.

How did you first find out you were both studying at WBS?

Charles: I shared a WBS news article on LinkedIn which Sunni spotted. It prompted him to get in touch as he’d been thinking about studying an MBA and wanted to know more about the course and whether I’d recommend it.

Sunni: I knew I couldn’t commit to a full-time, 1 year, MBA due to work commitments, and was deliberating between distance learning MBAs at WBS and other business schools, and so I decided to contact Charles to find out his opinion of WBS. From speaking to Charles, he confirmed the benefits of the blended approach that had drawn me to WBS in the first place, and with the Warwick Weeks and option to do some face-to-face modules, I thought that there would be a better balance and greater interaction with other students.

How well did you know each other at school?

Charles: I was in the year above Sunni but we spent a lot of time together over the years at school. We were both boarders in Sixth Form and the lower and upper years mixed so we played sports together and lived together.

What did you do after school?

Sunni: Although my family lived in Hong Kong, I stayed in the UK to do a degree in Business Studies before returning to my home country to work. I’ve since worked for a range of different companies in the finance industry, and it was only last year that I considered doing an MBA.

Charles: Shortly after leaving school I joined the Navy as a Warfare Officer before completing my undergraduate degree in Marine Studies. I’ve spent a total of 14 years at sea and became a Master Mariner, so I can captain any ship. More recently, I’ve been working in the renewable energy industry and I’m currently a Chief Officer. I’m always looking for a new challenge and the MBA presented an opportunity for me to do this and develop a better understanding of business management, accounting and finance.

What are your plans for after the MBA?

Sunni: I’ve been in the investment banking industry in Hong Kong for the past seven years and I’m thinking about the possibility of doing something completely different. It’s been over 15 years since I’ve studied and I’m hoping the MBA will open new doors – maybe I’ll become an entrepreneur or transfer into another field. I’m sure that whatever path I take, the MBA will be beneficial for my future.

Charles: For me, as my career path has been very specialised, the MBA is the next natural step to my development – I’m keen to remain within my sector and use the vast amounts of operational knowledge I’ve already accrued within the industry, alongside the business acumen I’m developing through the MBA.

Find out more about the Distance Learning MBA.