Andrew Sentance on coping with the 'new normal' 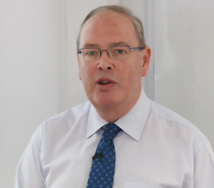 Economist Andrew Sentance believes Western economies are adjusting to a ‘new normal’ in which it is proving difficult to return to pre-crisis levels of growth.

But in a lecture at Warwick Business School the former Bank of England Monetary Policy Committee member argued some economies are faring much better in this process than others, with the UK, US and parts of northern Europe showing the most encouraging signs of progress.

In the advanced economies, recovery from the financial crisis of 2007-08 has been disappointingly slow. Despite historically low interest rates and quantitative easing, the first five years of the recovery have seen GDP in the UK rise by just 1.8 per cent a year, while Germany has grown by two per cent and the US by 2.2 per cent.

These are weaker rates of growth than seen before the financial crisis and much lower than the recoveries from recessions in the 1980s and 1990s. This has led some economists to speculate the crash has caused a permanent structural damage to the global economy, with the prominent US economist Larry Summers suggesting the global economy is suffering from “secular stagnation” driven by reduced investment rates.

"Secular stagnation is a theory based on a lack of demand - but world GDP is growing, not contracting," said Professor Sentance. "In 2014, the money value of world GDP is expected to be $77 trillion (£47.67 trillion), about 25 per cent up on 2008 and nearly two and a half times the level in 2000. The International Monetary Fund forecast it will stand at $101 trillion (£62.5 trillion) in 2019 – that is three times the dollar value of the world’s GDP at the turn of the century.

“So there is enough demand out there in the global economy. We can see that many emerging markets are growing strongly. Developing economies and emerging markets have grown at around six per cent a year in the five years since the crisis. The puzzle is why certain Western economies are struggling at the same time.

“A demand deficiency would show up in the labour market, and unemployment would remain very high, which was the case in 1930s but not in this crisis. Unemployment has recently fallen rapidly in the US and the UK to around six per cent. The G7 average unemployment rate is now back in line with what it was in 2004.

“Some US economists have applied crude Keynesian economics as if we are re-fighting the 1930s Great Depression, but this is a different situation and we are not seeing the deflation or protectionism that exacerbated the slump in the 1930s.”

Instead Professor Sentance argues the Western economies are going through a prolonged phase of adjustment and predicts better growth will re-appear later this decade.

“The pre-2007 growth drivers of growth have disappeared,” said Professor Sentance, author of Rediscovering growth: After the crisis. “We no longer have easy money, cheap imports and confidence in the policy regime acting as tailwinds to economic growth in the West. These three factors helped to sustain the long expansion of the UK and other western economies from the 1980s until 2007, with a brief interruption in the 1990s recession.

“These three tailwinds are no longer with us to support growth and we have yet to discover new forces to replace them. We are also seeing high and volatile energy and commodity prices, which have squeezed consumer spending and added to the drag on Western economies. The growth of Asia, as China and India become more important players in the world economy, is putting upward pressure on commodities, including food and energy.

“Significant structural adjustments are underway, and I see significant parallels with the impact of the shocks we saw in the 1970s. Then we also saw big shocks to the international financial system, to energy prices and a loss of confidence in the ability of governments to maintain the full employment experienced in the 1950s and 1960s.

“In the 1980s, the global economy re-adjusted to find new sources of growth and a similar process is now underway during this current phase of disappointing growth in the West.

“That process takes time and depends on the supply side of the economy, especially the performance of the labour market. Based on the experience of the 1980s, when Western economies reinvented themselves, a new growth phase could emerge in the second half of this decade.”

Some countries are making better progress than others in this adjustment process. Professor Sentance believes that economies which have a flexible labour market, invest in new technology and innovation and have an adaptable economy not so reliant on a large public sector will get there faster.

“Measuring GDP per head in the G7, Germany, the US and the UK are expected to see a 15 to 20 per cent increase on 2000 levels by 2015. By contrast France has seen more sluggish growth and Italy is seven per cent below its 2000 GDP per head figure,” said Professor Sentance, who is a senior economic adviser at PwC.

“In general the further north you go within Europe, the better you can expect the economies to perform. Among the emerging economies, Asia is where the best opportunities are, but growth prospects in Brazil, Russia and South Africa are not as strong as their economies are more dependent on energy and natural resources.”