Explore the exciting towns and cities close to campus

Lenders have to cut the jargon to avoid another crisis 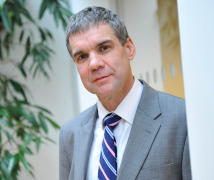 Mortgage lenders have to ditch the jargon and radically change the way they communicate with homeowners on interest-only mortgages if the UK is to avoid another financial crisis.

Behavioural economics expert Professor Daniel Read gave the stark warning with banks and building societies facing the prospect of writing off millions of pounds because householders have no way of paying them off.

The FCA says 2.6 million householders have an interest-only mortgage and they estimate that half do not have sufficient savings to pay off the shortfalls – which average £71,000.

Professor Read believes those homeowners in trouble are suffering from “excessive irrational optimism“ and says mortgage lenders have to offer customers a simple plan of action to quickly lift them out of their problem.

“People in general believe the future will be better than the present, we tend to have a built-in optimism bias” said Professor Read, who has consulted for the UK Government and the Financial Services Authority.

"People believe everything will sort itself out. When the costs of a small amount of delay are small, it can seem rational to delay another day. If you perceive the cost of delay to be small you will put it off. For example library charges; if you are charged just 5p a day for a late book, you will delay it because it is not worth a trip to the library to save 5p, but if this decision is made every day the total cost can become huge.

“It is similar for people who have interest-only mortgages. In order to overcome this bias the communication from mortgage lenders has to be personalised and very simple if it is to be effective. There is no point asking customers to ‘engage’ with their lender; they won’t do that, you are asking them to stare into the abyss and do they trust the lender to make the right decision for them anyway?

“Also, there can’t be a list of possible courses of action, just one course of action, and one they believe they can do and believe will have a positive effect.

“Asking them to increase monthly payments by only £50 might be a start. A specific action like this will get people started and can be habit-inducing, and they could increase payments over time and then maybe they will think I can put in £100 this month. It really has to be giving them an action to help them out.”

Professor Read, who was speaking at conference with industry insiders organised by The Broadcast PR Business, says people may falsely believe or hope the Government will bail them out or that the mortgage lender won’t repossess their house.

“Borrowers may not know what their options are,” said Professor Read. “It is important mortgage lenders make their communication brief with no waffle or qualification, outlining the simple action that can help the homeowner. They should use norms as well, for example; 60 per cent of people in your situation are doing this.”