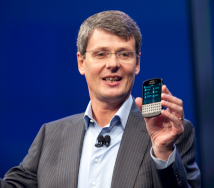 Associate Professor of Strategy Ronald Klingebiel writes how companies should learn from BlackBerry's demise and should not chase after a disruptive new technology in its sector once it has gone past, but wait for the next big thing instead.

It is now well known that successful companies often have an annoying habit of missing the next big thing. Harvard’s Clayton Christensen coined it the innovator's dilemma. He also produced advice on how to avoid the fate.

What is unclear, however, is what companies should do when, despite their best intentions, they do miss the boat. It happens frequently, especially in the fast-moving world of telecommunications, where disruptions occur faster than you can say “Is this really going to work?”

When caught out, firms typically start to panic, embarking on frenzied attempts to catch up at all costs. Being so occupied, they miss the next, next big thing, yet again. Dilemma begets dilemma. Companies fall into the same trap twice.

If you miss one wave…

BlackBerry is a case in point, a handset manufacturer that made its fortune on the back of innovative push-email technology. Its qwerty keyboards became the de facto standard in the corporate world. However, at the height of its success, BlackBerry ignored the rising popularity of touchscreen devices and also failed to embrace the disruptive potential of mobile app stores.

Executives really recognised this only once its profits and shares started to slide. By that time, unfortunately, the brand and network advantages enjoyed by Apple and Android had become unassailable. Of course, this did not keep BlackBerry from trying. A crisis was declared, a turn-around program announced, and all energy put into producing the Q10 and Z10 handsets, along with a revamped operating system, which were to finally take on the new smartphone leaders. Unsurprisingly, this came to little.

BlackBerry’s story since has not been pretty; its fire sale just fell through, and its CEO has been fired. The company faces an uncertain future, as it fights to stay afloat.

One wonders what might have been possible if, instead of trying to catch up, BlackBerry had devoted the same amount of resources on building a competitive position for the time after the iOS-app store bonanza, which seems to be fading already.

BlackBerry still curries some favour in the business market, where its enterprise server provides a trusted means of secure communication. Although employees now tend to work off several different devices, the business need for a secure environment and efficient integration remains. A whole new industry is springing up to address such device-agnostic requirements, ranging from new entrants like AirWatch, MobileIron, and Soti to established players such as cellphone operators keen on a slice of the action.

BlackBerry could have preempted this development by leveraging its unique enterprise server advantage. It could have now been leading this new area of mobile device management.

…prepare for the next

British Telecom (BT) is a different story. In the 90s, the company recognised the internet and data potential of third-generation mobile networks. BT went all-in, as did most competitors. The company was, however, forced to forego the technology when its ballooning debt levels necessitated the 2002 sale of its mobile arm, BT Cellnet, which became O2.

When BT regained the financial strength to get a 3G license, acquire a competitor, or act as a virtual operator, leasing lines from others, it did not immediately pursue these options even though Vodafone, O2, T-Mobile and Hutchinson’s 3 were starting to enjoy 3G benefits. Instead of running after a train that had long gone, BT focused on being ready for the next big thing.

In this case, the increasing similarity of what could be delivered on fixed and mobile networks augured an increasing convergence of the two, promising to disrupt business models in the industry. BT’s first crack at this was Fusion, a mobile service and device that was to use BT’s Wi-Fi when in reach of broadband access and other firm’s mobile coverage when beyond.

Although Fusion was unsuccessful, due to operators’ intransigence, BT’s follow-on attempt holds promise. It recently acquired a 4G license and aims to use it to provide high-speed connections to remote households that are hard to get to with cable. This gives BT’s multi-play offering of phones, internet, and TV much greater reach. It is also conceivable that consumers want to get all their connectivity needs (mobile & fixed) out of one hand. BT’s fledgling Broadband Anywhere tries to service this trend.

BT’s strategic preparedness might thus allow it to bridge the mobile-fixed divide more easily than competitors BSkyB and Vodafone can. BT’s outlook is positive again, despite the hit it took on 3G.

My advice for firms who feel they have missed out on the latest wave of innovation in their sector? In the spirit of BT, try to avoid getting into perpetual dilemmas. Think twice before chasing after disruptors when they have already tilted the game in their favour. BlackBerry’s demise serves as a warning.

Instead tech firms ought to take the long view, focusing on the big thing after next. Markets might forgive one oversight; just think of IBM or even Nokia, whose century-long histories are littered with missed opportunities and subsequent rebounds. But tech innovators probably cannot afford to fail twice in a row.

If you miss one wave, don’t swim after it. Prepare for the next.

This article was originally published at The Conversation. See it is also featured in The Week.