Drastic consequences if we do not tackle climate change 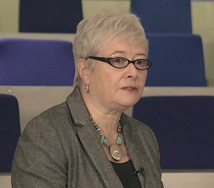 This week marked Earth Overshoot Day: the day in 2016 we – according to the Global Footprint Network – used as much from nature as our planet can renew in the entire year.

Among other environmental issues at this point of the year carbon dioxide emission reaches a point the forests can no longer sequester the levels in the atmosphere.

It is on the issue of climate change Joan MacNaughton, Executive Chair of the World Energy Council’s Energy Trilemma programme as well as an independent expert on world energy and a member of the University of Warwick’s Council, talked to Core Presents.

She believes the signs are very clear and the pressures of food production, diseases going to new places and migration are just some of the drastic foreseeable consequences we will face if we do not tackle climate change.

Ms MacNaughton said: “According to the International Energy Agency, we need $40 trillion between now and 2035 in energy supply investment and $8 trillion in energy efficiency and energy demand measures. If you look at what we need to spend to meet the goal of trying to keep global warming below two degrees centigrade, that figure goes up to $53 trillion.

“You need a partnership between energy developers and policymakers so we can have that ramp up in investment. We have to get this right because the foreseeable consequences are very drastic.”

View the full video below: