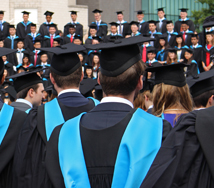 Warwick Business School undergraduate students came in their droves on a glorious Wednesday morning to celebrate the success of graduating in this summer’s ceremony.

A total of 398 undergraduate students packed into Butterworth Hall, at Warwick Arts Centre, to be presented their degree on the day by Professor Mark Taylor, Dean of WBS, and Professor Louise Gracia, Associate Dean.

The ceremony saw Stan Jallot pick up the Outstanding Student Contribution Award, which is presented every year to a University of Warwick student for exceptional achievement in contributing to the university community outside of their studies.

The award also sees family given the VIP treatment on the day as well as the prize on an iPad.

Then, on the Saturday, 351 postgraduate Masters students and MBA students, including the Full-time, Distance learning and Executive MBA, all met alongside doctoral students to revel in the success after all their hard work.

In total more than 78 nationalities across the globe graduated across both days.

Graduates, guests and faculty then made their way to the WBS graduation reception in the Rootes Building on both days for one last chance to catch up with class mates and tutors and to continue the celebrations after years of hard work come to fruition.

Honorary graduates on the Wednesday included Chief Executive of Credit Suisse, Tidjane Thiam (Honorary Doctor of Laws) and Anita K Bhalla OBE, who set up and developed the BBC Asian Network. She received an Honorary Doctor of Letters.

But what is it like to graduate from WBS? We spoke to our undergraduates to find out their feelings on the big day:

Stan pioneered the UniCycle bike-share scheme now popular across the University of Warwick Campus, seeing his vision officially role out in September 2015.

With 50 bikes and 10 stations around the Warwick campus, Stan gave students a chance to get on their bike, and we caught up with him just as he was about to ride one of his bikes into the sunset – with his parents in-tow no less.

“What a beautiful day. I’m happy to see everyone happy and enjoying their day. I was very proud to receive the OSCA with Gal – also a WBS student – I thought we did a great job here,” said a proud Stan.

“We thank all those that supported us. it was four years in the making. But we’re happy with the scheme and to see how it develops as it approaches its first anniversary.

“My personal highlight from university: I met great people, but also I believe the University really pushes you to do something different, so, in my case, starting a business from scratch and making it a reality. I’m really thankful for the University for supporting us the entire way.

"Now, just seeing how the campus is developing, I’m excited for the future students who will really be able to get around easily thanks to UniCycles.”

Stan will now continue his entrepreneurial spirit with a new breakfast delivery start-up venture in Zurich. It started in London, but is now spreading to Switzerland.

Stan and Gal will also continue to explore unicycles with other universities.

Student Deshan Hewavidana will be joining the Teach First – a charitable venture designed to tackle education inequality – on a two year programme.

The BSc Management student, who gained a First, said: “My personal highlight is the grade I received at the end of my degree. It represented the blood, sweat and tears that went into the course, but it just goes to show you that the amount of effort and hard work that you put in will always be rewarded – as I like to think it did in the end!

“I feel that my time at WBS has enabled myself to grow into the person I wanted to become through the opportunities I have been able to immerse myself in, for instance being involved in group projects such as Business Planning and taking ownership from the start to help build my confidence and interpersonal skills.

“Without a doubt I would not have been so assured and able in my abilities if it wasn’t for the dedicated staff and support network at WBS who were able to provide me with these opportunities in the first place so I wish to thank them dearly.”

Both Artem and Klimenti achieved firsts in their degrees. Artem is now working as an investment banker in the Netherlands while Klimenti will be starting work in the City.

Artem said: "I feel proud to be graduating with a First Class Honours degree as well as the top result in Finance of my year.

Klimenti added: "I think my three years at WBS were some of the best years of my life. The experience was extremely valuable both in terms of the skills I acquired, but also in terms of the friendships I made."