How the mask of leaders can easily slip 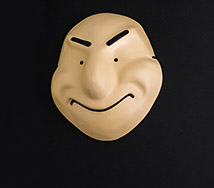 A student enters the room wearing a mask with an angry face on it. His classmates stifle giggles and Piers Ibbotson, Principal Teaching Fellow in the WBS Create department and a former Royal Shakespeare Company director says: “You look very cross.”

It is a class on leadership, practically every business school trains its students on how to be an effective business leader but not many use the masks to convey the subtlety of communication and the importance of it.

In the ‘create space’ - a purpose-built sprung-floor drama studio - Mr Ibbotson is putting the masked student through the same initiation he once undertook with UK mask troupe Trestle Theater and has stayed with him throughout his career training senior managers for the likes of Adidas and WPP.

The mask, who can’t speak in the exercise, nods vigorously in agreement - he is angry.

“There’s no need to be cross,” says Mr Ibbotson, but the mask nods insisting there is. “Do you know why?”

Now the mask stops nodding and looks at Mr Ibbotson seemingly unsure of what to do.

“Somebody in here is in love with you.”

The angry mask begins to melt, he looks almost expectant.

For a moment a look of desperate sweetness appears as he tilts his head to one side in a sign of hope and a little “ah” is audible from his classmates.

“No, not today,” says Mr Ibbotson and the angry mask returns, furious at the trick.

This strange phenomenon is known in the clown world as the ‘counter mask’ and it gives an insight into how we can’t always control what we want to communicate. Our face, body language, the clothes we wear and even the words we use are our mask, but it is perhaps only a third of what is being communicated and understood. The rest is made up by our audience and observers.

“The way people project their understanding of emotions on to what you are showing is very complex,” says Mr Ibbotson after the masks have been packed away, the angry mask being one of several used in the exercise. “Our understanding of what is being meant, what is going on in the room, what we all feel, is made up of your intentions and our projections. But that is very unreliable and very complex, and you can get it wrong.

“Most of our understanding of training managers is either broadcast - that is public speeches, where the speaker is in control of the mask through scripts, rhetoric, lighting and staging to ensure the emotion of the audience is controlled. Or it is dialogic, just two people trying to understand each other, where we are putting in lots of work to get through the complexity of the mask. We are co-creating a shared meaning by checking back and forth to make sure we have understood.

“But there is another situation, a very interesting middle ground that the mask demonstrates. It is a public situation, a problematic place where two people are in dialogue but it is witnessed by others, that is when you get the counter mask, and you will find most team meetings are like that.”

As a business leader this becomes a difficult conundrum. Mastering a meeting and what people take from it is a skill managers need to produce an effective workplace, but the mask exercise has shown they in fact have little control over what is being interpreted by their team.

“As a leader you are no longer in control of the effect of the mask,” says Mr Ibbotson, author of The Illusion of Leadership. “When I am trying to get you to understand something some people witnessing it might interpret it as a row and take sides. Then the leader tries to broadcast, saying ‘it is all fine’, but it is too late as people have witnessed an exchange with the mask.

Related article: Why leaders should go back to the classroom

“These counter mask effects pop up all over the place and it is very difficult to control. Leaders work to control the organisation and its culture with public speeches, meetings and internal PR, but there is a middle territory that they lose control. That middle ground is in fact where most decisions are made.”

The mask exercise shows in fact how leaders depend on their followers or staff to create an illusion of being in charge; their leadership is being held together by their audience. As soon as the crowd decide they are not a leader there is nothing the CEO or manager can do.

“People are interpreting your actions in ways you think you can control, but you can’t,” says Mr Ibbotson. “You may wear the angry mask to instil discipline, so you say ‘I will be very big and loud, that will make them scared’. But instead it makes you look proud and absurd, because you don’t have full control of other people’s interpretations.”

If people no longer believe in you as a leader the mask suddenly looks very different. In the last throes of Nicolae Ceau?escu’s tyrannical rule of Romania he gave a speech in what is now known as Revolution Square to quell unrest in the country.

It started like the many others he had given in his 24-year reign with choreographed cheers, but eight minutes in booing begins and despite his pleading Ceausescu can’t appease them. His wife Elena comes to the balcony to advise him, but suddenly his power is melting, his mask has gone and he looks only like a confused old man. In matter of hours the couple had to flee the capital as protestors stormed the Central Committee building and four days later they were shot dead.

Related article: Why Steve Jobs was such a charismatic leader

It is an extreme example, but shows how our mask, our perceived world can collapse in an instant if we are not careful.

“Our co-created perceptions of what is going on, who is nice, who is to be trusted, who we all believe, is perilously fragile and can be changed very easily because we are all trying to understand and make meaning from it,” says Mr Ibbotson.

“You say one thing to a room one day and everybody says ‘yes that is right’ - the context shifts a little bit and then nobody believes it anymore, that happens all the time. Most of the time we are all working hard to prevent that happening; this reality we live in is more fragile than we think because we are not as in control as we think we are of the impressions we present.”

The fragility of who we are, of who we are perceived to be is evidenced in behavioural science with experiments continually showing how easily our decisions and beliefs can be manipulated with researchers having us saying and believing the complete opposite in an instant.

Nick Chater, Professor of Behavioural Science, adds: “We believe we have depth as a person, but research has found time and again that is an illusion. Those apparent beliefs and desires that we cook up when we explain our behaviour are actually just being created for that moment, they’re not stable, we don’t have stable beliefs and desires which generate our behaviour.

“In fact we invent those beliefs and desires when we have to make a choice or justify our action. We infer our own inner life from our words and actions, just as we infer those of a third person. And then we invent what we will say and do next.”

The mask exercise shows how easily our intentions can be mis-interpreted. We might think we control everything about communication, but it is far more complicated and business leaders need to be aware of that.

“It is very difficult to gain control in a public situation, the management literature does not help at all,” says Mr Ibbotson.

Instead acting might provide lessons for business leaders; suspend the ego and live in the moment.

“You have to recognise the audience and go with it,” says Mr Ibbotson. “Acts of leadership in the moment; that is all there is, just acts, and they precipitate the action you want… with a bit of luck.”