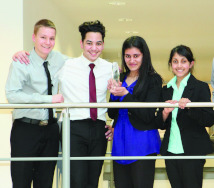 “I have been inspired by this project,” says Anika Rahman and that is exactly the kind of reaction the University of Warwick’s Big Deal is aiming to achieve.

In an attempt to widen participation and make sure state school children are well represented in the top Russell Group universities, the University runs a four-year programme called Goal, working with young people in Years 10 – 13. A key part of the programme is a Dragon Den’s style competition called the Big Deal.

But progress at the most selective institutions has been much slower. The most advantaged 20 per cent of young people are seven times more likely than the most disadvantaged 40 per cent to enter the top universities.

The Goal programme looks to change that. It is aimed at those schools where children would not normally dream of reaching one of the country’s top universities, showing them it is possible.

This year up to 50 children from schools across England took part in the Big Deal, with teams from Barking Abbey Secondary School, of East London, Lady Manners School, of Bakewell, Derbyshire, and St Paul’s Way Trust School, of Tower Hamlets, London reaching the final. Barking Abbey’s team Hermes (pictured left with Innovo) took top spot, wowing the six judges from the world of business with their website ‘uni-set’, which will dispense tips and advice to sixth formers on how to reach a Russell Group university.

“People from private schools get the preparation they need to get into the top unis, but state school kids don’t.” says 14-year-old Karim Benotmane. “Our idea was to get people from deprived social economic areas into the top universities, as their talent is hidden. We emailed universities and asked them for tips, UCL show how to write an effective personal statement on our website.”

“When the business gets to a higher level we could put advertising on the website, but the main income would be schools buying our service. We also have plans for a peer-mentoring service, where year 11 children will be mentored by sixth formers to help them reach university.”

Karim and his team-mates James Jackson, Iqra Iqbal and Sabiha Chowdhury, won a trip to Sweden to visit the Volvo car factory, but the real value was the experience of working for 10 weeks with a mentor from the business world in James Rowe, a graduate of Warwick Business School.

“This has made it a lot clearer that I want to get into a Russell Group university,” says Karim. “And it shows how making my own business is a lot more achievable than I imagined.”

Anika Rahman, of St. Paul’s Way Trust School, and her team D-Feat - Majoice Maguddayao, Aniqa Khanom and Zobeda Begum - were highly commended, winning £15 of Amazon vouchers. Their business plan came with a social responsibility, as they looked to organise dance classes for youngsters in Tower Hamlets.

“We wanted to help our local community because there is not much for them,” says Anika. “This has been an eye-opener; I have been inspired by this project to go to university.”

“This was my first time mentoring and I have learned a lot,” says Ms May-Johnson, who studied English and American Literature at the University of Warwick and now works for AON Consulting. “I wanted to be involved because I am the first person in my family to go to university. I went to a state school and it is quite difficult to get into a top university when there is nobody around with no experience of it and of how to play the system. So I thought it would be a good idea to get involved and help other young kids. I am really proud of them.”

Ryan Daniel, of Barking Abbey School,  and his team Innovo - Hanifa Miah,  Maira Sajee, and Rohan Miah – developed ‘Hearitis’ a bleeper that can find lost keys stuck under a cushion or hidden in a cupboard. It has already caught the interest of retailer WHSmith.

“I have always had an interest in business as a career, but this has really spurred me on,” said Ryan, whose team of 15-year-olds won Kindles for being runners-up. “I was project manager for this and it has really developed my organisational skills and has given me the confidence to go forward.”

Instinct, of Lady Manners School (pictured below), were also highly commended after putting together a smart water bottle that tells parents how much more their child needs to drink.

Charlotte Kidd said: “I have learned a lot doing this. It has inspired me to go to university; if I work hard I think I can get into one.” Judge Shelley McIvor, who is associate director at Global Action Plan, was impressed with the creativity and breadth of talent on show.

“What shone through was their passion and commitment,” said the Warwick Business School MBA graduate. “They all did an absolutely stunning job and a few judges have earmarked who they will be looking to take on in their companies in the next few years!”

Warwick Business School Associate Dean for undergraduate programme Peter Corvi added: “WBS is delighted to have hosted the ‘Big Deal’ finals this year.  Each of the teams worked very hard and all of the presentations were very impressive.

“It is very gratifying to see Year 10 pupils engage so effectively with one another and with their mentor to come up with a unique business plan and to present it with such confidence to an audience of business leaders.  I really hope that the experience has stimulated the pupils’ interest in business and, of course, in applying to University.  Some of them may very well turn out to be the business leaders of tomorrow.”

For further information about the Goal programme, please contact Dr Lauren Thompson, the programme manager on 0247 6574051 or email goal@warwick.ac.uk.