Nudging us to health on BBC's Trust Me I'm A Doctor 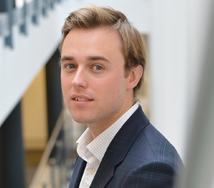 Creating a competition in your office could be a simple way to becoming more active and leading a healthier lifestyle.

That is what Ed Gardiner, of Warwick Business School, found when conducting a four-week experiment in partnership with Claire McDonald from the Royal Society for Public Health for BBC 2’s Trust Me, I’m Doctor.

The World Health Organisation predicts almost three-quarters of men and two-thirds of women in the UK being overweight - that is a Body Mass Index (BMI) of between 25 and 29.9 - by 2030.

Despite all the health warnings levels of inactivity and obesity are increasing, but Mr Gardiner and the team used established behavioural science to show simple interventions can get people out of their office chairs and moving more.

“We showed on the programme that creating a competition, giving people a pedometer to track how many steps they do and prizes, can increase activity by 30 per cent,” said Mr Gardiner, who is part of the Behavioural Science Group at WBS.

“There's well-established findings that competition can improve people's productivity and performance, and by giving the group a weekly league table, they were keen to keep up with their colleagues.”

Mr Gardiner added: “In behavioural science there is the concept of ‘social proof, where, if you commit to doing something with somebody else you are more likely to do it, and we saw that the group working together were more committed.

“Just handing out information about nutritional content or exercising does little to influence people’s behaviour. I know I’m meant to eat five-a-day, it’s just not convenient.

“I believe that most people want to live a healthy, happy life, doing what’s best for themselves, family and friends. But in reality - consciously or not - the decisions people make regularly knock them off course. A tough day at work justifies driving in, ordering takeaway keeps the children happy, or financial stress means ending the gym membership. We’ve all been there.

“This is where behavioural science can help, by helping people make the decisions that will benefit them and lead to a happier and healthier lifestyle. And often it is simple interventions, like creating a competition that can do this.”

Another experiment on the show saw the use of ‘choice architecture’ at a Co-op supermarket to nudge shoppers to buy more vegetables.

“One of the things we did was to put paper at the bottom of baskets dividing them into sections for different items, with one being for fruit and vegetables, another for everything else,” said Mr Gardiner.

“Another was to give people a segment of clementine as they came into the shop. These little nudges helped people to buy the healthy food. These are the sort of psychological tactics supermarkets use to persuade us to buy high value products, but we can use them instead to make healthier choices when shopping.”

Behavioural science has exposed the true nature of how people make decisions and helped to question the dominant economic theory that people are rational and intent on maximising their ‘utility’.

“How we humans behave is not objective or always rational according to economic theory,” said Mr Gardiner.

“In behavioural science we look at how we can better understand why people behave the way they do, relying on objective measures and teasing out a causal relationship. Our behaviour is driven by our unconscious more than we realise or like to realise and behavioural science helps to find these hidden biases.”

To learn more about behavioural science sign up to professor Chater's free online course - The Mind is Flat: the Shocking Shallowness of Human Psychology.

Read more on the Trust Me I'm A Doctor experiment and watch the episode on the BBC iplayer.