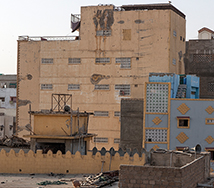 Gangs, violence, death and poverty are a daily concern for many young adults growing up in Karachi.

In 2013 alone, at least 2,700 people were murdered, more than in any other city in the world. In fact, The Express Tribune, an English-language newspaper, publishes a crime map every day in its Karachi edition, under such headlines as ‘Shootings and raids’ or ‘Mishaps and bodies found’.

Ibrar Asim is one such young man growing up in Karachi who has seen violence from up close. He has lost four uncles, two cousins and one aunt to gang violence.

But that life was not for him.

Ibrar was determined to earn an honest living rather than be lured into the pitfall of gang violence. However, it was not easy: The United Nations Development Programme (UNDP) calculates that more than 31 per cent of Pakistan’s population fall into the 15-29 age bracket, a large portion of which are uneducated and have no vocational skills.

The unemployment rate in Karachi is 21.45 per cent but, according to the Pakistan Bureau of Statistics 2013-14 estimates, the labour force participation rate for youths in the city was 44.2 per cent, leaving nearly 60 per cent idle.

Against such adversity and despite the odds, Ibrar carried on going from job to job until stumbling across United Nations Development Programme’s (UNDP) Youth Employment Project. The scheme enabled him to train as a machine operator in a garment factory. After enrolling and completing the programme, he was hired by the Pelican garment factory as a computerised machine operator. It also helped him continue his education and he now dreams of studying for an MBA.

Ibrar is also a member of the local education committee in his area, a position he uses to ensure that his peers are not left behind due to the struggles of poverty.

“I will continue to fight for a better life for myself and others,” says the 19 year-old from Lyari.

Warwick Business School PhD student Umar Taj has spent the last year researching effective ways to keep young adults such as Ibrar away from gangs in a crime-ridden area of Pakistan.

Working alongside the UNDP in Pakistan Umar has used behavioural science to increase enrolment in the UNDP’s programme with more than 5,000 young men and women from conflict-ridden neighbourhoods of Karachi having been trained in garment manufacturing skills since the launch of his project at the start of 2016. Among them, nearly 2,000 at-risk youths have secured employment after completing the training.

Using evidence from behavioural science Umar developed ‘nudges’ - small interventions to change behaviour - to help youths move away from gangs and into the programme.

“We wanted to get vulnerable youths from three gang-ridden areas in Karachi to participate in vocational training programmes, build skills and then get them employed,” says Umar.

“The aim of the nudges was to provide meaningful and viable economic opportunities to youths as a deterrent against crime, violence and even drifting into extremism.”

To understand the situation in Karachi better, Umar and the UNDP conducted more than 50 interviews with potential and current trainees, and those who had completed the training.

Umar found people were not aware of the training and employment opportunity provided by UNDP and also there was not enough social support to nudge people into enrolling in the training programme, completing it and ultimately getting employed.

The data collected through the in-depth interviews was then fed into the development of a ‘behaviour change scorecard’ and Umar identified five nudges that would push youngsters into the programme: demonstrating behaviour; focus on past successes; salience of consequences, social comparison, and social support.

These had to be affordable in a strict budget and saw the introduction of factory visits for potential trainees and showing videos of success stories to current trainees. Umar established a ‘Youth Network’ so the trainees could support each other, alongside a youth ambassador network for the different training programmes.

Orientation sessions were set up in the communities to spread word of the training; more emphasis was made about the absence of a course fee, the provision of transport and the employment opportunity in all communication campaigns; trainees were provided professional looking bags and badges and job placement centres were set up at the institutes where the training was held.

For Umar, the project is also important in that one of its key focuses was on empowering women. One such success story witnessed so far is Humera’s. Thanks to the programme she was able to support her family.

“Previously I only thought about the next meal. But now I feel I can do much more with my life.”

With a new-found confidence found through enrolling in the scheme, Humera was promoted to the position of a machine supervisor within a few months. She is now looking forward to developing herself further.

Umar adds: “This project truly reflects the value and impact of applying behavioural science research into practice. A greater effort still needs to be made in connecting with industry and society and so generating meaningful impact.”

The project will continue throughout 2017 and Umar is hopeful it will help many more young adults like Ibrar and Humera in making their life better and keeping them out of poverty and gang violence.