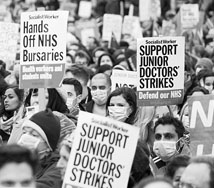 Analysis of millions of photographs on Flickr has found that protests can be mapped across the world as they happen.

Merve Alanyali, Tobias Preis and Suzy Moat, of the Data Science Lab at Warwick Business School, analysed data on 25 million photos taken and uploaded to Flickr in 2013 across 244 countries and regions to produce a map of the world’s protests over the year.

Alanyali, a PhD candidate in the Data Science Lab, part of Warwick Business School’s Behavioural Science Group, said: “Recent years have witnessed waves of protests sweeping across countries and continents, in some cases resulting in political and governmental change.

“Much media attention has focused on the increasing usage of social media to co-ordinate protests and provide instantly available information on these events.

“In light of these reports, we began to investigate whether it is possible to identify protest outbreaks through quantitative analysis of activity on Flickr.”

Dr Preis, Associate Professor of Behavioural Science and Finance, added: “For each country and region, we identified photographs taken and uploaded to Flickr in each week of 2013, and determined what proportion of these photographs was labelled with the word ‘protest’ either in the photograph title, description or text. We considered both the word ‘protest’ in English, and translations of the word in 33 other languages.”

As an estimate of the actual prevalence of protests in each country or region, the team considered data from the newspaper The Guardian. For each week in 2013, they determined what proportion of news articles about a country or region were labelled with the word ‘protest’.

Alanyali added: “Our analysis suggests that data on photographs uploaded to Flickr may contain signs of protest events. Our findings underline the potential value of photographs posted on the internet as a source of global, cheap and rapidly available measurements of human behaviour around the world.”

Tobias Preis and Suzy Moat teach Big Data Analytics on MSc Finance and the suite of MSc Business courses. They also teach Complexity in Social Sciences on the school's postgraduate courses, plus Behavioural Sciences for the Manager on the Executive MBA.