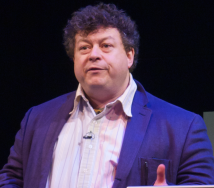 Ogilvy Group UK vice chairman Rory Sutherland predicts behavioural science will be the next revolution in business after the internet.

And as Warwick Business School now houses the biggest Behavioural Science Group in Europe the man tagged as the ‘biggest influence in marketing’ believes it is the best place to be for aspiring students.

The rise of behavioural science – or behavioural economics – has, Mr Sutherland says, offered a chance for marketing to regain the influence it had lost to economics and provided psychology a ‘Trojan horse’ into the boardroom of major businesses.

At a talk given at Warwick Business School as part of the launch of the Warwick Marketing Society Mr Sutherland revealed how behavioural science is influencing not just advertising and marketing, but creating new business opportunities.

“Understanding how we actually make decisions and behave rather than how we think we decide and behave is really important for business,” said Mr Sutherland.

With the use of behavioural science Mr Sutherland gave the example of Hailo, a smartphone app for booking a taxi that has been used by three million Londoners and is now in 13 cities around the world, with Sir Richard Branson now backing the venture. Users can track their taxi’s progress thanks to GPS until it is outside their door.

“Hailo has not shortened waiting times or travelling time,” said Mr Sutherland, author of The Wiki Man and columnist for The Spectator. “It has solved a psychological problem. We hate uncertainty and thanks to Hailo, the uncertainty as to whether the taxi will turn up, why it is late? Or has it come and gone while I finished my drink? All that worry has gone, because you can look on your phone and see where it is. Hailo has simply eliminated some uncertainty from our lives.”

Mr Sutherland used HS2, the proposed high-speed rail project now running at an estimated cost of £50 billion, to illustrate how behavioural science could save millions of pounds.

“Instead of it being an engineering problem where journey times could be halved so business people would be able to travel quicker and have more meetings, it could be solved by behavioural science,” said Mr Sutherland. “Really this is a psychological problem, ‘how to overcome dead time on the train?’ Installing Wi-Fi on all trains would solve that at a fraction of the cost. HS2 is always measured in speed, because there isn’t a measure of tedium.”

Mr Sutherland believes economics has been allowed to become the dominant voice in the boardroom and among policymakers, but increasingly its models based on an absolute objective world are proving to be wrong. Behavioural economics is providing better answers.

“Very importantly behavioural economics has re-branded psychology,” said Mr Sutherland. “Because how we humans behave is not objective or always rational according to economic theory. Engineers, medical people, scientific people, have an obsession with solving the problems of reality, when actually … once you reach a basic level of wealth in society, most problems are actually problems of perception.”

Mr Sutherland said for decades marketing had been targeting people’s rational behaviour, but it is the unconscious biases and habits that it should be talking to.

“It was social psychologist Jonathan Haidt who said that the conscious brain thinks it is the ‘oval office’ but in reality it is the ‘press office’,” said Mr Sutherland. “Marketing been talking to the press office for too long. Our behaviour is driven by our unconscious more than we realise or like to realise. Once we have decided on something then we rationalise it.”

Warwick Business School Professor Nick Chater, Professor of Behavioural Science, has put together the University of Warwick's first Massive Open Online Course (MOOC). Entitled 'The Mind Is Flat: The Shocking Shallowness of Human Psychology' it reached its subscription limit in just 48 hours on the FutureLearn platform, but the free six-week course will be running again early next year.