The 15-year battle to bring mobile payment to the West 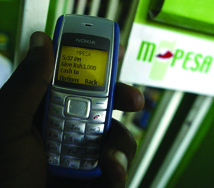 As Apple Pay goes live in China, Mark Piesing discovers how squabbling egos delayed the technology's arrival in the West for 15 years, while it thrived in Africa.

Flying cars, domestic robots and microwaves that could make meals to order were all technologies that futurologists predicted would be embedded into our lives by now. As was the technology to pay for a coffee or a bunch of flowers with just a wave of the hand rather than a fist full of coins – indeed, this seemed rather a safe bet.

Even with the introduction of Apple Pay (a mobile payment service that allows users to pay in shops with one tap of their iPhone) in the United States, paying for everyday items with a wave of your phone is still largely a fantasy to most people in the West, although it is already part of the way of life in many parts of Africa and Asia. Mobile payments can refer to paying for, say, the box set of Game of Thrones on your tablet at home. However, in a wider sense it is referring to something much more radical than an extension of e-commerce. It is about being able to use your phone rather than cash or card and in the future about being able to leave your wallet or purse at home for good.

The delay in mobile payment breaking out into the mainstream has always been a mystery to those outside the industry, as the technology to achieve this has been around for at least 15 years.

Now Pinar Ozcan, Assistant Professor of Strategic Management at Warwick Business School, and Filipe Santos, Professor of Entrepreneurship at INSEAD, have discovered why it has taken so long in the West for this technology to become part of the daily nine to five. As they explain in their paper The Market that Never Was: Turf Wars and Failed Alliances in Mobile Payments, it is all about power.

“It’s a political game between the banks, the operators and the handset manufacturers who are used to being dominant players in their industry and suddenly they have had to collaborate together,” says Ozcan. “And they fear what is at stake is nothing less than who would dominate the new market.”

While there are other technologies that could deliver the dream of cashless payments, even Apple sees Near Field Communication (NFC) as the best option at the moment despite the fact that it relies on old-fashioned radio. NFC allows smartphones and similar devices equipped with a simple tag to use radio waves to quickly transmit encrypted data such as debit or credit card information or loyalty programme data to a similarly equipped point of sale device provided they are less than 10cm apart.

To find out exactly why a technology that was seen way back in 2002 as the next big thing still hasn’t entered the mainstream and to gain a better understanding of how new markets emerge Ozcan and Santos studied the sector between 2006 and 2011 and conducted 65 interviews with 40 local and global industry leaders.

What they found, says Ozcan, was the perfect example of a “vicious circle”, because “when you don’t agree, you don’t make the investment and there is no infrastructure” like NFC-equipped smart phones, high quality user interfaces or point of sale devices. This then means there is less consumer interest and less incentive for the companies to work together.

“So the approach of these dominant players to the negotiations was very much one of dictating the terms rather than collaboration or compromising,” says Ozcan. “What the service is called, where the chip goes, who deals with security all ended up becoming big discussion points that never got resolved.”

Dominant players, Ozcan argues, were simply not used to having to collaborate and found it difficult to judge the value of their negotiation position when the market they were negotiating about didn’t really exist.

“From the outside they appear to be small choices, but they weren’t as they had big implications for who dominates the industry,” says Ozcan. “If, for example, the chip went on the SIM card then because cards are provided by the mobile operator the banks would be become dependent on the operators, who would then become kings of the new service.

“As they couldn’t agree they literally walked away from it and ended up doing their own projects which were inferior” and distracted them from the negotiations  – with the banks ending up with contactless cards and mobile operators trying to use SMS for payments. Others like retailers Starbucks became fed up waiting and have successfully introduced their own cheap alternative that acts like a gift card by using an app that customers download on to their phones which then displays a 2D barcode that is scanned at the checkout.

“So if the banks and operators couldn’t agree on the design then merchants were saying why I should invest in a point of sale device,” says Ozcan.

And the end result was a lack of infrastructure. Apple pulled out of providing mobile payments with the iPhone 5 as the similar Google Wallet, which was introduced earlier, seemed to have struggled for this reason.

So why didn’t a big bank buy a small operator or a big operator buy a small bank and provide the service? The problem is that people won’t switch.

Adoption of the technology was much faster in countries like South Korea and Japan, Ozcan says, because consumers will use a bank, mobile operator and even shop from the same group of businesses called ‘keiretsu’ in Japan. In Kenya mobile payments took off due in part to the absence of an existing banking and telecommunications infrastructure.

Initially it looked as if Apple Pay had successfully cut through this cycle, as the banks had trust in Apple’s ability to build a secure system. Yet now, Ozcan says, “it is an even bigger mess than before” as - for example - many retailers who first lined up with Apple Pay in the US then switched camp to their own CurrentC system, which uses QR codes and their own app, and allows them to keep track of their customers behaviour. Unfortunately they have now found out they can’t offer Apple Pay as well.

Tobias Schreyer, co-founder of e-money specialists the PPRO Group, provider of B2B services to companies like Visa and Mastercard, agrees that the slow take-up of NFC has been a matter of factors like “point of sale, the authorisation of the network infrastructure, critical mass as well as the lack of consumers”. The mobile operators and by default the hardware manufacturers’ reluctance to engage with NFC earlier will mean “they will get the bill as they lose out on these transactions”.

Schreyer though is positive about the future, as the introduction of Apple Pay to the iPhone 6 will, he believes, “encourage the whole industry to adapt at a faster rate” and “the consumer will prevail and they will just use NFC enabled contactless payments, whether their card or account is loaded onto their phone by Apple, Google, a retailer or even more realistic – by their card issuing institution”.

Andrei Charniauski, Senior Marketing Specialist at analysts IDC, agrees with Ozcan that it is “all about the technology” as “you need to get hardware on the ground to make consumers use it and right now there isn’t much”.

However, in 2014 it is also “all about big data as well” and who will control it.

Related article: Apple leads the way with its Quantum Strategy

Ultimately it will, he believes, take five to six years “to reach critical mass when you can be confident of going into any store and it will accept any phone”. Whether Apple is big enough to achieve this critical mass by itself is a different matter.

In the end it is rather ironic, says Ozcan, that in the midst of these power struggles “what was never a problem was customer demand as there have been many pilots around the world in cities like Atlanta and they have achieved some very high satisfaction rates”.

However, she says, “there will be a tipping point and one of the services will win perhaps as quickly as in two to three years’ time. It is like game of musical chairs when everyone knows the song is ending”.

After this, Ozcan says, we will be using ours phone for “everything” such as controlling our home and unlocking our car.