Andy Lockett appointed as the new Dean of WBS 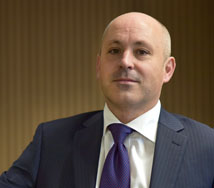 The University of Warwick is pleased to announce the appointment of Professor Andy Lockett as the new Dean of Warwick Business School.

Professor Stuart Croft, the Vice-Chancellor of the University of Warwick, commented:

“WBS is one of Warwick’s largest academic departments and it is held in very high regard both in the UK and internationally.

"The Economist magazine ranks our full-time MBA the best in the UK and in the world’s top 20.  WBS is also recognised as a valuable partner both in our region (recently hosting a Coventry City of Culture bid event), and nationally through its contract to train Bank of England staff, and its activities at its base at The Shard in London.

"It is no surprise therefore that this role attracted international interest. I am so delighted that Andy was selected to be the new Dean from that very strong field and that he has accepted the role. I am looking forward to working with him as he leads WBS towards still greater success and global impact.”

Andy, who is a Professor of Strategy and Entrepreneurship, said: “It is an incredible honour to be appointed Dean at WBS, a world-class business school at the heart of a world-class university. Since joining WBS, I have been privileged to work alongside an amazingly talented group of academics and administrative staff across WBS, the wider University and beyond.

"I am genuinely excited at supporting Stuart Croft's vision for the University and at the prospect of building upon the successes of current WBS Dean, Mark Taylor.

"I see my role as one of channelling the collective endeavour of the staff, students and alumni to put WBS at the forefront of business thinking at a regional, national and global level. I’m really excited by the prospect of what we can all achieve together."

Voted one of the world’s 100 leading Professors of Entrepreneurship by technology company executives, entrepreneurs and investors, Andy has published extensively in leading business and management journals, working in partnership with organisations across the private, public and third sectors.

Prior to joining WBS, Andy worked at the University of Nottingham and progressed to the rank of full Professor. During his time at WBS, Andy has held a number of management roles including Associate Dean and Deputy Dean as well as leading the Research agenda.