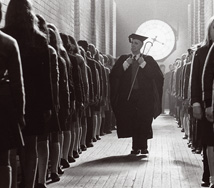 How do two people pass each other in a corridor or dance together without colliding and ending up in a heap?

The answers may seem so obvious, so natural as to require no explanation. But even such basic co-ordination requires rapid decision-making based on multiple, often competing, factors.

Deciphering why people are so adept in such situations without having to talk has long occupied Nick Chater, Professor of Behavioural Science at Warwick Business School.

Now Chater and WBS colleagues Jennifer Misyak, Tigran Melkonyan and Hossam Zeitoun have proposed a theory of ‘virtual bargaining’ explaining how and why we follow “an inordinately elaborate set of rules without consulting any rule book" in our daily lives.

Virtual bargains are constantly struck with family, friends, acquaintances and strangers. So wide-ranging is the concept, as described in two recently published papers, that Chater argues it holds the key to understanding why verbal communication emerged at all.

At its simplest, virtual bargaining holds that people normally behave as they would if there was an explicit negotiation about what to do (and what not to do). If one person moves to one side of the corridor, the signal to whoever is approaching from the opposite direction is unambiguous. In many contexts we can communicate equally clearly with much subtler signals, such as a raised eyebrow or a wink.

Detailed interpretations humans make based on such signals and shared knowledge go to the heart of the theory. But in addition to these signs and how they are understood, we must also consider the many elements shaping the unwritten rules to begin with.

“We all behave in a regulated way and we can be outraged if rules are broken,” says Chater, a co-host on BBC Radio 4’s The Human Zoo and adviser to the Behavioural Insights Team, often called the ‘Nudge Unit,’ a recent spin-out of the UK Government’s Cabinet Office. “But the list of things that contribute to them is pretty endless.”

People mostly strike bargains which are beneficial to both sides and virtual bargaining is the same.

Individuals tend to use virtual bargaining “to do the best for themselves”, adds Chater.

But which virtual bargains you implicitly agree will vary greatly depending on your identity and that of the person you’re bargaining with.

The dynamic between a headmaster and a nervous new pupil heading down a school corridor on an apparent collision course is very different to that between a timid teacher and a school bully. Virtual bargaining works successfully when both participants draw the same conclusion about, in this case, who should get out of the way.

What factors determine the virtual bargains we reach? An exhaustive list may be impossible but some of the most apparent include body language, eye contact, social conventions, manners, social status, customs, habits, notions of fairness, pride and fear. Some factors may be hard-wired into our DNA and others learned from our social environment. Many are both - things we have some innate understanding of but which are moulded by life experience.

If the headmaster stays to the right without looking up, social status and manners will surely lead the nervous pupil to move accordingly. But eye contact and dominant body language from the bully might cause the timid teacher to disregard status and fairness and get out of his way.

Also, past experience is a powerful factor at both group and individual level.

Joining the back of a queue or holding a door open for someone can be considered the result of virtual bargains struck so many times they have become conventions. For two individuals who work together or share tasks, “if you previously held the hammer while I held the nail” that makes it easier to co-ordinate next time, says Chater - yesterday’s bargains are a precedent for what we will do today.

A classic human coordination experiment is the Hi-Lo game, in which two players independently choose to respond Hi or Lo. Both know if they choose differently, neither will be rewarded. If both choose Hi, they’ll get a big prize, and if both choose Lo, they’ll get a small prize. Experiments consistently show both tend to go Hi, as one might intuitively expect, but traditional theories cannot truly explain why.

Many theories in economics and psychology assume that players choose by trying to figure out what the other person will choose, but in the Hi-Lo game this poses a problem of circularity.

It’s as simple as thinking ‘what would we do if we could discuss it as a team?’ As each player wants the best for themselves, the answer is obvious. Most people quickly realise this and choose ‘Hi’ without discussion.

Related article: Why we stick to big decisions

The intricate web of human interaction encourages us to apply team reasoning to problems ad hoc, even if our motives are often individualistic.

Melkonyan, Associate Professor of Behavioural Science, believes virtual bargaining represents an advance on game theory, which has used the Nash equilibrium – devised by Nobel Prize winning mathematician John Forbes Nash, whose life was turned into the Oscar winning film A Beautiful Mind. Nash equilibria have been used to explain the Hi-Lo game, but can’t eradicate the problem of circularity, unlike virtual bargaining.

“Empirical and experimental evidence has shown there are areas where the Nash equilibrium has not worked, that is what motivated our research,” says Melkonyan. “People are able to achieve much better outcomes than Nash explains, and we find virtual bargaining offers a more plausible explanation in some situations.

“When explaining team interactions like football, where there is a lot of unspoken cooperation and collaboration, virtual bargaining has much better outcomes for the involved parties than Nash equilibrium.

“Virtual bargaining shows how people break out of the circularity: by imagining what they would agree if they could communicate, but because this is ‘obvious’ they don’t need to talk, they just go right ahead and do it.”

Dancing to the same beat

Indeed, firing questions at Chater leaves little doubt about the theory’s potential in explaining human behaviour in a wide range of areas.

Is true improvisation possible between two skilled dancers moving without a routine?

“They have incredibly rich shared knowledge that enables fast, fluid movements,” says Chater. “In a way, it’s not as improvised as it looks because the rules that both dancers know are well-defined.”

What about sports teams? “Team spirit and unity is not just about heart, but about coordinating quickly, so everyone knows what the others will do,” says Chater. “Professional football teams show fantastic co-ordination, whereas primary school teams just wander the field in clumps.”

Is comedy funny because we make a virtual bargain allowing performers to break the unwritten rules? “Observational comedy often involves pointing out something we all do or think, but don’t acknowledge,” says Chater. “And the rules become obvious when we break them - like Monty Python’s washerwomen talking philosophy. The ‘unwritten’ rules, of who does what, when, and how, are what guide our social behaviour.”

Ultimately, Chater is convinced that virtual bargaining “is at the root of communication and we can speculate that language would never have developed without it”.

Misyak is a Research Fellow at WBS and gained her PhD in psychology, specialising in how human minds learn and use languages, from Cornell University in the US. She agrees that virtual bargaining can be viewed as the building blocks for language.

“Verbal communication is type of a joint action,” says Misyak. “Languages are highly ambiguous, yet we don’t often realise we are co-ordinating together in making rich inferences because we resolve ambiguities so swiftly.

“Any particular utterance can have vastly different interpretations due to the context. For example if a boss tells an employee to clear his desk, we realise the boss does not literally mean to clean the desk of everything, but that the employee is being sacked. But if it was common knowledge that the employee was up for promotion and the boss had a smile on his face, then that very same utterance means something quite different.

“With irony and sarcasm words have multiple meanings; so, too, with countless seemingly ordinary uses: is ‘bank’ a river bed or money storage? We may not even be aware of such linguistic feats, but at a fundamental level virtual bargaining is involved, both in creating and flexibly using our language such that we tacitly ‘agree’ on the same meanings.

“This kind of remarkable flexibility in inference is not something other existing theories readily explain.”

What do animals do?

Chater suggests that explicit rules – whether in government, games, sports, or languages – are typically a partial and modified form of unwritten rules that developed through virtual bargaining. There are many questions he wants to explore in further research, not least whether virtual bargaining is uniquely human.

Chater argues that humans naturally look at each other to establish a virtual agreement to co-ordinate, using cues such as eye contact or facial expressions. This could be a distinctive aspect of how people co-ordinate their behaviour - distinct, for example, from shoals of fish or flocks of birds, where each animal need only ‘follow its neighbour.’

Perhaps the human brain’s trillions of neural connections allow us to intuitively understand what is expected in almost any situation, whereas no action is obvious to any animal until a prior action requires a direct response?

The theory of virtual bargaining may attract both support and criticism in the years ahead. That’s just one of the unwritten rules academics have to accept.