Forward or fuzzy: how much should central banks reveal? 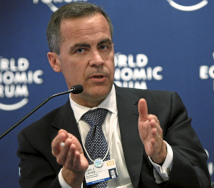 The effective death of the forward guidance strategy offered by the Bank of England came with the announcement in early February that there would be a switch to a less quantitative approach.

Dubbed by some financial commentators as “fuzzy guidance”, the latest communication strategy falls well short of publishing the Monetary Policy Committee’s (MPC) best guess for interest rates and the uncertainty about its projections.

The UK and the US are having difficulty writing down, prior to the decision, the circumstances under which interest rates would rise. Why is that difficult? Well, give it a go yourself! Write down all the macroeconomic conditions in the domestic economy, and all those international macroeconomic events, that might trigger a rethink on interest rates. The list would be longer than War and Peace; and, it would almost certainly miss the exact scenario that actually unfolds.

Not good at predicting

Economists are simply not good enough at predicting the future to make this communication strategy viable. Nevertheless, it’s not the end of forward guidance, for the UK, the US or Australia.

The Achilles' heel of monetary policy has always been that an adverse shock to aggregate demand could lead to unfeasibly low (nominal) interest rates. In the recent recession, some economists guessed that the Federal Reserve would have needed rates of -4 per cent. That raises the spectre of deflation, which no rich economy has wanted to flirt with since the Great Depression of the interwar years (with the possible exception of Japan).

Extraordinary monetary policy measures, such as quantitative easing, and emergency fiscal measures, similar to the stimulus unleashed in Australia, only go so far in moving aggregate demand. At some point in the future – possibly not that far off – there will be a shock to aggregate demand that will simply swamp anything the monetary and fiscal policymakers can throw at the economy. (This has happened already for some.)

All the bankers will have at that point is promises. And it would be best if those had some credibility before the crisis. Australia should learn from the communication errors in the UK and the US and get the apparatus for forward guidance working now. That apparatus should be quantitative and backed by probabilistic assessments of future interest rates.

Like Australia, many central banks do not currently offer quantitative signals about the forward path of interest rates. With monetary policy often determined by a committee (such as the Board of the Reserve Bank of Australia), it can be troublesome to agree on a quantitative path. Two shadow monetary policy boards, one in New Zealand and the other in Australia use opinion pools to circumvent this difficulty.

Members of these shadow boards publish individual probabilistic interest rate assessments, along with an aggregate (or consensus) board view (for many horizons in the case of Australia). The Australian shadow board, run by the Centre for Applied Macroeconomic Analysis (CAMA) at the Australian National University and published monthly by The Conversation, reveals that some individuals, at times, see asymmetric risks to the paths of interest rates.

Another concern with the quantitative approach to forward guidance is that the public might misinterpret the signals about future monetary policy. The commonly-used alternative to the quantitative approach uses words to describe the risk of a change in interest rates. Phrases such as “policy accommodation”, or “policy firming”, tell the public that in the future interest rates should be expected to fall, or rise, respectively.

A verbal approach not backed by probabilities will lead some (economically literate) members of the public to wonder when an interest rate change might occur, and how big the risk would have to be for a shift in the strategy to be triggered. Many central banks, including the Reserve Bank of Australia, use 'fan charts' to communicate the uncertainty about their best guesses for inflation and output growth. The financial markets have no problem understanding probabilities.

Some central banks already provide explicit quantitative interest rate forecasts. For example, the Reserve Bank of New Zealand has published its best guess for around 17 years. And more recently, the central banks of Norway and Sweden have moved to communicating with the public via probabilistic paths - revealing the uncertainties about their best guesses for the monetary policy stance.

Moreover, the publication of probabilistic projections hasn’t adversely affected credibility, even though actual interest rates have typically differed from the ex ante “best guess”. To cater to casual users of the forecast paths, verbal descriptions of the risk associated with interest rate events should be linked explicitly to the probabilities.

For example, a 66 per cent chance (or more) of a hike (25 basis points or more, “policy firming”) could be communicated as a “high” risk event. A 33 per cent chance (or more) might be labelled a “moderate” risk, and so on. Used consistently to describe the key probabilities, verbal descriptions should convey probabilistic information that the public would find helpful in making economic decisions.

To clarify the interpretation of interest rate paths requires the forecast delivery to be tailored to the end-user. Members of the public who care little about exact probabilities still need to know that the choice of words signal changes in risk.

This article originally featured in The Conversation.