Let it go: Does emotion have a place in the boardroom? 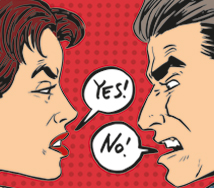 New research has found company strategy involves just as much emotion as it does hard facts and cold calculating, Ian Wylie finds out more

Emotions don’t have a place in the workplace, we’re often reminded. We should check those emotions at the door, particularly if we’re going through the door to the boardroom where critical, strategic decisions are about to be made.

The assumption is that emotions cloud judgment, and impair our ability to make rational, objective decisions.

But 20 years ago, Portuguese neuroscientist Antonio Damasio made an unexpected discovery that suggests we should neither ignore or deny our emotions, but recognise and manage them during the decision-making process.

While studying people with damage in the part of the brain where emotions are generated, Damasio found that they had something else in common: they couldn’t make decisions. They could describe what they should be doing in logical terms, yet they found it very difficult to make even simple decisions, such as what to eat.

Damasio’s discovery suggests that at the point of decision, emotions are actually significant in enabling us to make a choice. Even with what we believe are logical decisions, the very point of choice is arguably always based on emotion.

The role of emotions in strategic decision-making fascinates Feng Liu, Assistant Professor of Strategy at Warwick Business School who, alongside Sally Maitlis, now a Professor of Organisational Behaviour and Leadership at Saïd Business School, has published research on the emotions they observed within the senior management team of a Canadian software company.

“Organisational strategies are made by real people and strategy is not something that is static, but created and shaped over time by human beings,” says Liu. “I want to understand how the interactions between people influence the process of making organisational strategy, as well as the content of the strategic decisions that are made.”

There are tomes of mainstream strategic management literature from heavyweights such as Michael Porter that shed light on how organisations scan their environment and analyse competitors before making rational decisions on long-term goals.

But the “strategy as practice” perspective – looking at strategy as something which real people with emotions do – is nascent. It asks the question, what do people do to develop strategies in organisations? If academics really are to help managers manage strategy better, then a deeper understanding of what they actually do seems a sensible starting point.

“My approach is to observe the microdynamics, to watch in real-time the interactions between managers, the minute-by-minute displays of emotion, and how they influence the proposals that are made, and the final decisions that are taken,” says Liu.

The microethnography of interactions in minute detail may be relatively new to the management field, but video ethnography – the recording of the stream of activity of subjects in their natural setting – has been used in education since the 1970s to observe student-teacher interactions and see how it influences learning outcomes. The roots of video ethnography itself can be traced back to the late 1890s when researchers recorded Senegalese women making pots.

Using microethnography, Liu and Maitlis analysed conversations about 10 strategic issues raised across seven top management team meetings at a Canadian software company and identified five different kinds of emotional dynamic, each associated with a different type of strategising process. These range from “energetic exchange and generative strategising”, as members showed their interest in the issue and in other team members’ opinions, to “depleting barrage and curtailing strategising”, where one team member’s barrage of intense negative emotion overpowered two other team members’ intense positive emotional displays, depleting their energy, curtailing the discussion, and a decision that failed to win unanimous commitment.

“We were aware that emotions existed in important strategic discussions, but we didn’t expect it to be as intense,” admits Liu. “We were shocked to hear managers call each other stupid, or yell at each other ‘Don’t f--k up our beautiful game!’ We went in there with open minds to simply observe, but we were very surprised about just how intense the positive and negative emotions displayed often were.”

But as a result, Liu has some sympathy for bosses, such as Apple’s Steve Jobs, Amazon’s Jeff Bezos, Ryanair’s Michael O'Leary and Microsoft’s Steve Ballmer, who have been accused of macho or intimidating management styles in meetings. “Talk about bullying bosses can be quite biased, as you don’t see the other side of the story, and understand the dynamic between managers,” she says. “Maybe it’s the dynamic between them that we should blame, rather than the individual boss.”

The conclusion of Liu’s research is that managers must understand the emotions and dynamics of decision-making, then coordinate and manage them to achieve the desired outcome. She is now writing a method piece exploring how the replay of critical episodes in board meetings can help executives to reflect on how they behave and what they might do differently if they want a different process or outcome.

Tamara Friedrich, Associate Professor of Entrepreneurship and Innovation at Warwick Business School, is also convinced that managers and leaders can learn the skills of emotion recognition and management. Friedrich was one of a team of academics asked by the Army Research Institute in the US, to conduct a comprehensive review of the literature on how emotions play into the process of leadership and affect decision-making.

“Organisations such as the Army are now realising that it is foolish to ignore the role of emotions. They provide us with another form of information that we can use to make decisions,” explains Friedrich.

The literature review concluded that managing emotions does not simply imply suppressing or ignoring them, but that emotional competencies respond favourably to training. These trainable competencies range from the accurate perception of emotions in others and regulating one’s own and others’ emotions, to tailoring emotional expression as part of goal-directed behaviour under different conditions and in different situations.

“While some organisations, such as the military, may not be used to talking about emotions,” says Friedrich, “we found that it helped to present emotions as another type of data set which is relevant to their environment and to leadership as a whole.”