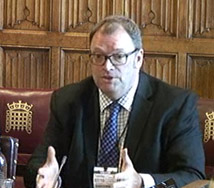 Professor Michael Bradshaw has warned a House of Lords committee that European Union and US sanctions could endanger the Arctic’s delicate environment.

The US and Europe have imposed a series of escalating sanctions against Russia since its annexation of Crimea in March and support for pro-Russian separatists in eastern Ukraine. This has included restricting the export of technology needed for Arctic, shale and deep-sea exploration.

US oil and gas corporation ExxonMobil and its partner Russian state-owned Rosneft have been able to complete their first exploratory well in the Kara Sea and have reported a substantial find of oil and gas. Igor Sechin, the head of Rosneft, has named the new field ‘Pobeda’ (Victory). However, if the sanctions remain in place it will not be possible for ExxonMobil to be involved in drilling activities next year, which will inevitably slow the pace of development, which is the intent of the sanctions.

Russia is looking to tap new oil fields in the Arctic but needs the technology of Western companies including ExxonMobil, Statoil, ENI, Royal Dutch Shell, Schlumberger and Halliburton Co to drill during the short Arctic summer when the waters are ice-free.

Professor Bradshaw is concerned Rosneft could decide to carry on drilling without the Western expertise and so increase the risk of a catastrophic accident in the Arctic. And he adds that Russia's new gas deal with China will not help.

“I am worried Rosneft will carry on regardless,” Professor Bradshaw told the House of Lords Committee on the Arctic, which is looking into the opportunities and risks that changes in the Arctic climate will bring, including their impact on UK interests and the UK’s international relations (click on video below). “I don’t think they have learned enough to do it to the same standard. There is danger in isolating them from the network of global oil and gas companies with Arctic experience.

“These sanctions on technology have been targeted at this project in the Arctic. The idea is to delay progress of oil exploration. At the recent Sakhalin Oil and Gas conference the Russian speakers were annoyed and full of indignation, but it impacts on Western companies as well. The sanctions have created a good degree of uncertainty, which also affects the complex network of western companies involved in Sakhalin. Norway is especially concerned, because it has a lot of companies involved in Russia’s oil and gas sector.

“The immediate effect is the impact on planning for next year. It is hoped it is a short term blip, but it remains to be seen what the relational damage will be. ExxonMobil has had to leave the project for the time being and ExxonMobil is carrying Rosneft through this phase. The Western companies are providing the finance and experience for the drilling to happen.

Western companies are eager to work with Russia to extract the huge oil and gas fields it has as their supplies of ‘easy oil’ start to run dry.

“There is plenty of oil in the middle-east but Western companies have no access to it,” said Professor Bradshaw. “The Western companies need to book new reserves, even if they don’t get it out immediately it is good for the balance sheet. These companies will not enter into loss-making activities, but reserve access is critical and they have the technological edge at the moment.”

Drilling for oil and gas among the frozen ice of the Arctic presents a huge engineering challenge and the sanctions will delay developments.

“There is a problem of access,” said Professor Bradshaw. “There is a limited window of around six months, but that varies from year to year, before the ice cuts off the project site. The complexity of drilling in the Arctic is a challenge and adds costs. It has pushed the technological frontier as new solutions have been obtained to build platforms and drill in such conditions, with the high wave heights and ice, especially as Arctic-class vessels are in short supply.

“There is an oil spill response set-up, but if something catastrophic happened and they don’t have access to the field because of ice, then we are in unchartered territory. There is a capping system, but if they have a spill under ice there is no evidence that they can deal with it. The NGOs are adamant it would be catastrophic. The oil companies say the pressure and depth is not as big in the Arctic, but we only have their word for it.”