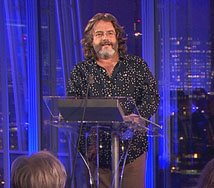 Gregory Doran told the BBC’s Richard Dimbleby Lecture held at WBS London at The Shard that access to Shakespeare is every child’s “birthright”.

The Royal Shakespeare Company’s Artistic Director, who has been described as one of the 'great Shakespearians of his generation', made a passionate case for the relevance of the Bard in the year of the 400th anniversary of his death and revealed the company has made its education work with schools a priority.

Arts funding is under attack as the Government continues to make cuts to public spending and prompted a Warwick Commission on the Future of Cultural Value in the UK, headed by Jonothan Neelands, Professor of Creative Education.

Mr Doran said: “In Shakespeare's jubilee year, it's one of my priorities as artistic director of the RSC to see that I can do all that I can so children at school today are given access (to see Shakespeare).

"As well as bringing our productions to new audiences in China and across the world, we are keen to extend the reach of Shakespeare into our own communities at home here in the UK, and it is one of the aspects of our work of which I am most proud.

“I was very lucky to have been offered the passport that the arts give to enrich your journey through life. In this jubilee year there can be no greater legacy of Shakespeare’s ability to enhance our lives than to grant every child that passport… it is their inheritance.

"Our provision of access to Shakespeare, to drama, to literature, to music, to art, to culture, is an index by which we judge ourselves to be civilised, to deny that, to disregard that, to under-fund that, is to cheat ourselves and our children and deny them their birthright."

Mr Doran, who first joined the RSC as an actor in 1987, begins rehearsals for a new production of King Lear in three month's time but admitted it was "a play I could not watch for over a decade as, before he died, my own father declined into dementia".

He said: "It was too painful, too accurate, too damn true."

Shakespeare’s words, said Mr Doran, “provide the key to your soul” and the director revealed that during his century - the 1600s - the English language grew by 10,000 words and 600 to 2,000 were invented by the playwright, including assassination, addiction, bedazzled, lacklustre, moonbeam, new-fangled, scuffle and puking.

“Language roiled and boiled in a crucible of invention,” said Mr Doran.

After 400 years, though, keeping the language of Shakespeare fresh and stopping his most famous lines falling into cliché is challenging. Mr Doran recounted how, in a 2008 production of Hamlet, he “fresh-minted” the famous ‘alas poor Yorick…’ moment by using a skull bequeathed to the RSC by Polish composer Andre Tchaikovsky.

The title of the lecture was ‘Is Shakespeare Chinese?’ Mr Doran has been overseeing the RSC’s first tour of China, with its King and Country production on show at Beijing, Shanghai and Hong Kong. It sees Henry V, Richard II and Henry IV Parts I & II performed together for the very first time under the banner King and Country to launch the RSC’s celebrations of the 400th anniversary year of Shakespeare’s death, having started at the Barbican.

And the opening night in Beijing proved to Mr Doran that Shakespeare is relevant today and to everybody.

“It was living proof of Shakespeare’s genius unfolding before my very ears and eyes,” he said. “That first night proved that Shakespeare is Chinese. You don’t have to make him relevant… he just is.”

In his plays are lines that still echo today. When Mr Doran directed King John in 2001 on the day 9/11 struck in New York, just after the North Tower collapsed it said “vast confusion waits as doth a raven on a sick-fallen beast’.

“That is what we all felt that - vast confusion waited on the world,” said Mr Doran as he pointed out that Shakespeare’s society nearly had its own 9/11 with the failed gunpowder plot nearly blowing up the entire royal family on 5/11 in 1605."

Hosted by David Dimbleby, with his brother Jonathan and sister Sally in the audience along with many of his family, the Richard Dimbleby Lecture was founded in memory of his father, the BBC broadcaster who died 50 years ago, and has been delivered almost every year since 1972. It has featured a host of prominent figures including Bill Gates, Sir Terry Pratchett, Prince Charles and Bill Clinton, while Martha Lane-Fox, who delivered the lecture in 2015, was in attendance.

In front of BBC Director General Tony Hall, who gave a spech at the end thanking Mr Doran and WBS, along with a host of names from the arts and acting world, including actors David Suchet and Hugh Quarshie, Mr Doran added: "Shakespeare is for today and for everyone... As his friend Ben Johnson said 'he was not for an age but for all time'. As Shakespeare roars into his fifth century that assertion seems pretty indisputable."