Discover the recruitment superpower of 1-2-1 consultations, and why business leaders are embracing them

She who holds the purse strings deserves better 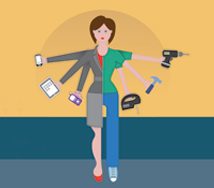 Kate Mew explores why, at a time when women have more economic power and consumer influence than they have ever had, there’s mounting evidence that advertising to the female market is failing.

Women currently control approximately $20 trillion globally in annual consumer spend. Predictions for growth range from $22 to $28 trillion by 2020 - in aggregate women now represent a growth market that is larger than China and India combined. Meanwhile, 80-86 per cent of all UK and US consumer purchases are made by women; women are the biggest group of online purchasers and the most active on social media.

By 2020 there are predicted to be more female millionaires than male; currently 70 per cent of UK and US wealth is in the bank accounts of the over-65s, the majority of whom are women. A survey from American consumer insight firm GFK MRI revealed that US boomer women control a net worth of $19 trillion – and they’re increasingly using that spending power online, bucking the perception that no one over 40 knows how to navigate cyberspace or operate a smartphone. According to global market research company Forrester Research, boomers on average spent $650 online over one three-month period, compared to $581 for Gen X (born 1960s-80s) and $429 for Gen Y (1980s-2000s).

Products thought typically to be the reserve of men; cars, electronics and home improvement, are now an even split, with 50 per cent being purchased by women. Women are also the majority decision makers when it comes to property, holidays and financial services.

Women are no longer a niche market; they’re a significant financial force. And yet in a study of 58 brands by US market research firm Insights in Marketing, not one brand did better than 49 per cent approval for effective marketing to women. According to a report by She-conomy, 91 per cent of women said that advertisers don’t understand them.

What’s going wrong? There’s never one simple solution to a problem as complex as this. The evolution of more nuanced gender roles, the demographics of those creating and commissioning campaigns, how digital technology has created feedback loops between consumers and producers, all of these things have an impact.

"Brands can no longer rely on quantitative data or the prescribed marketing personas of old." says Lindsay Pattison, Chief Executive at Maxus UK & CSO Maxus Global. "They need to listen to real women - online communities are important gauges of sentiment (but brands need to enter respectfully).

"Then they need the flexibility to react to all this. The brands that succeed are those that pay attention to what’s happening culturally and look beyond clichés of femininity to understand context, what’s impacting women’s real lives."

‘Shrink it and pink it’

Without women in a position to apply their experience and knowledge it’s hardly surprising that many campaigns still run on outdated gender stereotypes, the ‘shrink it and pink it’ methodology or worse, are actively alienating their customers with campaigns using insulting images of women because they don’t realise women are their customers.

Designer Marc Jacobs faced a furore over his Miley Cyrus campaign, in which a zombie-esque looking Cyrus is photographed sitting on a beach next to a model who may be ‘resting’ but appears to all intents and purposes to be very dead. Female models as corpses sadly feels less shocking and more a natural progression of an industry which has pushed the limits of representations of women as increasingly passive, while also incredibly sexualised and available.

See also Vice magazine's infamous Women of Fiction issue from 2013 that made a fashion shoot of the suicides of Dorothy Parker, Sylvia Plath and Virginia Woolf; and the America's Next Top Model murder episode in which models had to pose as victims of deadly assault and one received the highest compliment of the show - "the look on your face is just extraordinary. Very beautiful and dead".

Brands still appear to be struggling to accept that the old adage about any exposure being good no longer holds true. Women are more likely to rely on peer recommendation and advice from other women than they are brands and they are mobilised online, spending 40 per cent longer on social networks and eight per cent longer online than men.

The Miss Representation and Everyday Sexism projects, Pinkstinks, SPARK and the twitter campaign #NotBuyingIt are all creating public spaces for women to vent their frustration and anger, spreading the word on brands getting it wrong and encouraging consumers to boycott. Increasing numbers of women are waking up to the realisation that they hold power in this dynamic.

Global clothing company American Apparel came under fire for the way it portrays women in a far more sexualised way than men in both its advertising and online store. Bloggers and designers subverted the brand’s clichéd marketing by flipping the genders, exposing how ridiculous female models’ poses look when imitated by men.

Gender-flipping swiftly became a meme – the most celebrated 2013 example being the feminist version of US singer Robin Thicke’s controversial Blurred Lines video. As a way of subverting stereotypes, gender-flipping is a useful exercise for brand marketing: it can expose whether your campaign suffers from clichéd, gendered thinking.

A record 40 per cent of US households with children under the age of 18 have a woman as the primary earner (Pew Research Centre), in the UK the number of stay-at-home dads has doubled in the last decade (Office for National Statistics). JWT's The State of Men report released last year highlighted a mass transition for men.

"Today, gender conventions are blurring, and men are formulating a more nuanced idea of what it means to be a man," says Ann Mack, Director of Trendspotting at JWT.

French Connection’s 2011 spring/summer campaign is emblematic of the moment. Their previous foray into gender-focused marketing was ironic – plastering assertions of ‘This is The Man’ across images of a rugged, unshaven and long-haired model, while its more recent present offering was more ambiguous, asking the consumer: ‘Are you man?’

The man stands confidently on a beach alongside a bloody animal carcass. We see him riding a floating toy duck. The contrasts are intended to raise the question ‘what does it mean to be a man or women in the 21st century?’ It’s a deliberate and self-conscious attempt to turn contemporary gender dynamics into a marketing strategy in-and-of itself.

Hinting at a broader shift in attitudes toward beauty and gender, French model Casey Legler became the first female model to sign exclusively as a male model in 2012; discovered by US photographer Cass Bird, renowned for authentic androgynous images. Legler's signing follows on from the success of Australian androgynous male model, Andrej Pejic. Increasing numbers of fashion, cosmetics and luxury brands are utilising gender neutral aesthetics in product display and packaging.

The abiding rule in advertising has always been that it’s about creating desire and that’s best done through insecurity. Create an unobtainable ideal, sell in the idea that it is the only option and consumers will continue to seek out and purchase the products which promise to get them closer to it, even if doomed to fail.

But research led by Tamara Ansons, Assistant Professor at Warwick Business School, could have far reaching implications for the marketing and advertising industries as it exposes a flaw in the rule.

“Attractive female models and celebrities are routinely used in advertisements and yet previous research has shown mixed reactions, some have found the effect to be positive, while others have found it to be negative," says Ansons.

In their paper, Defensive reactions to slim female images in advertising: the moderating role of mode of exposure, Ansons and her colleagues showed that idealised images of women do elicit a negative response from women viewers. What’s new in Ansons’ study is that who bears the brunt of that negativity (the woman herself as damage to her self-esteem, or the brand) is dependent on image proximity of the brand to the image.

“We showed that when consumers are blatantly exposed to idealised images of thin and beautiful women they are more likely to use a defensive coping strategy to boost self-evaluation by denigrating the pictured woman," says Ansons. "This can negatively affect the products these models endorse through the transfer of the negative evaluation of the model to the endorsed product.

“It certainly raises some intriguing questions for advertisers that use this potentially threatening imagery in their ad campaigns. Some brands have tapped into this. Dove, for example, has been using everyday females in their advertising campaigns probably to reflect the fact that they are aware of how this female imagery is unattainable and perceived as threatening by viewers.”

By featuring women noted for their brains and achievements and not purely their physical attributes, Marks & Spencer’s Leading Ladies campaign is strategically targeting the very women who are voicing alienation. The shoots, by Annie Leibovitz, feature actress Dame Helen Mirren, dancer Darcey Bussell, artist Tracey Emin, Save the Children CEO Jasmine Whitbread, and burns survivor Katie Piper.  The mix of ages, backgrounds, and physical types offers women a view they can relate or aspire to.

“The campaign, launched in September 2013, by Marks & Spencer suggests it has gained a more refined understanding of its consumers,” says Ansons. “M&S presents non-threatening female imagery that signals the diversity of successful women. In all likelihood that results in more favourable responses towards the brand. By applying this insight to its ad campaign it appears to have revitalised the brand with its core target.”

Considering the ever-growing spending power of women across all demographics, brands need to reconsider their approaches to marketing to women. Brands holding on to a legacy view of their audience as male may need to review that supposition.

In marketing terms, women are not a homogenous group, and the quickest way for brands to alienate them is to generalise or rely on outdated stereotypes. Kill the clichés.