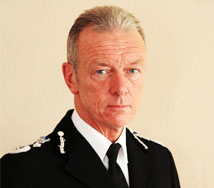 The event involved a group of frontline officers, staff, managers and senior leaders tasked with coming up with new ideas to improve collaboration between the ‘blue light’ emergency services in London.

The University of Warwick and Warwick Business School is involved in research with the Metropolitan Police Service to analyse the force’s huge amount of data to create an evidence base for decisions in operational policing.

Neil Stewart, Professor of Psychology and co-director of the Centre for Operational Policing Research, who is leading the research, said: “We were delighted to host the Metropolitan Police Service’s very important Commissioner's 100 event.

“We are always keen to work with organisations looking to take an evidence-based approach. The Metropolitan Police has a huge amount of data, detailing the working lives and decisions that police officers take.

“We can use this to answer key questions about the science of human behaviour in areas like trust, integrity, and well-being.

“The police are keen to use evidence-based research to direct their response to modern trends in crime, just as in healthcare randomised trials are used by NICE to decide on where to put the NHS' resources.

“It is an exciting project that could have real impact.”

The event was held on November 8 and was one of the last Commissioner's 100 meetings before Sir Bernard retires in the new year.

Before being appointed as Commissioner Sir Bernard was Chief Constable of Merseyside Police, where he introduced the force's ‘Total Policing’ model focusing on crime, victims and professionalism.

This approach led to crime reducing by a third, a 26 per cent reduction in anti-social behaviour and the highest level of criminal asset recovery outside of London (more than £20 million over three years).

Police Sergeant  Luke Dillon said: "Warwick has been supporting the Met over a number of years with research and data analysis and this event was another exiting opportunity to work together.

"We are delighted to have been able to hold this event in such an iconic London venue. We were privileged to be joined by senior leaders and frontline staff from the London Ambulance Service, Fire Brigade, RNLI, London Air Ambulance, British Transport Police and HM Coastguard.

"The Commissioner's 100 has a track record of bringing new ideas forward and helping to implement them. This is the first C100 event which is truly multi-agency. It was a great opportunity for staff at all levels to share good practice and discuss new ways of working together.

"The event focused on looking at the strengths and weaknesses of our current working practices and how we can improve in the future."