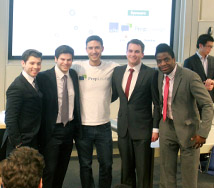 The competition attracted the participation of the best undergraduate and graduate school students from ten prominent Russell Group universities and Business Schools.

The aim of the competition was to connect outstanding talent with top consultancies and provide a national platform for students to hone their consulting skills.

Each participating university sent a team of four students to analyse a set of complex case studies over two rounds. All teams had the opportunity to present their findings in front of a panel of judges made up of consultants from Accenture, Deloitte and PwC. The teams were subsequently invited to attend a networking gala which gave the participants a chance to relax, network and receive feedback from the consultants judging the competition.

With the University of Cambridge already confirmed to host next year’s event, the WIUCC has set the foundation which promises a vast platform bustling with creative students and globally-renowned employers, each primed to make a huge impact on the consulting industry for years to come.

The WIUCC was spearheaded by Vincent Looi and Elwinder Singh, President and Vice President of WCS respectively. They would like to congratulate the Warwick team on their fantastic achievement as well as thanking the WIUCC’s main sponsors – Warwick Business School and PrepLounge, and all judges and participants that were in attendance.