How neuroscience can help with financial misconduct 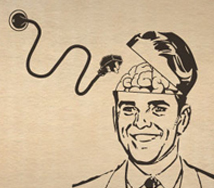 Should we have foreseen the UK PPI scandal, and could the country’s mortgage market be next? The answer is all in the mind – the brain to be specific.

How to predict which financial markets are vulnerable to misconduct is an open question. There have been many studies into this area but, until now, none have examined the role of neurology, ie what was actually firing in the brains of those London traders when they fixed the LIBOR rate – the inter-bank interest rate which determines interest rates for financial contracts around the world – that came to light in 2012.

This area of science just might be the key to a model that accurately predicts the link between misconduct and market competition.

Neuroscience categorises our response to moral dilemmas into two types of reaction: emotional and non-emotional. They are made by different parts of the brain and cause us to act differently.

Emotional responses are fast decisions made by the ventromedial prefrontal cortex. Our actions following an emotional response are based on rules, for example, ‘it’s wrong to steal or kill’.

Which financial crimes trigger such an emotional response in financiers? It is difficult to be sure. One leading candidate is 'pump and dump', the practice of boosting a stock through false information then selling it at an inflated price (this was made famous by the film The Wolf of Wall Street). Another example is money laundering, which is often a product of drugs and violence.

Non-emotional responses are reasoned decisions made by the dorsolateral prefrontal cortex. Our actions following a non-emotional response are consequential, so calculated in terms of pros and cons – if I steal from the rich, I will be better off, but the victim won’t notice.

Financial crimes that trigger a non-emotional response most probably include mis-selling, exaggerating a product’s value, such as in the Payment Protection Insurance (PPI) scandal – which led to the largest consumer redress scheme in UK history, with more than £38 billion paid to claimants – 'cherry-picking' (allocating winning trades to preferred customers) and 'front-running' (ie insider trading).

An emotional response should be more of a deterrent to a crime than a non-emotional response. It is the difference between mugging someone for £50 (emotional, as you know that violence is wrong) and not telling a client they’ve accidentally overpaid by £50 (non-emotional, as you didn’t deliberately cause the problem, plus, you might think, your client can afford it).

We can plug this new neurological perspective into a model called the 'misconduct matrix' which represents three market settings.

The model goes further and breaks down each of the settings into two types of competitive environment, niche and mass.

A niche situation permits profitable segmentation. When new firms enter a market and incumbents retreat to a specialism profit margins grow, but volumes fall, as they are serving a narrower customer base. Examples include the UK credit card market and over-the-counter (OTC) trading, when securities are bought and sold between traders rather than on an exchange.

A mass market is one which is threatened by commoditisation, where firms try to retain a wide consumer base, so profit margins drop. Examples include mortgages and the independent financial advice sector.

This model allows us to predict which types of markets are most vulnerable to corruption.

How could the model have predicted PPI misconduct?

To demonstrate the matrix in action, let’s take the case of PPI mis-selling in the 1990s, now billed as the UK’s largest-ever financial scandal. PPI was sold alongside mortgages with the false promise that it would cover repayments if the policyholder was made redundant or couldn’t work due to illness.

At its height more than 6,000 regulated firms in the UK were selling PPI, ticking the ‘many competing firms’ box in our model. It was certainly a mass market product as every new entrant pushed margins down. We also class mis-selling as a non-emotional dilemma.

According to the matrix, these three conditions rightly position the PPI market as ripe for misconduct. To demonstrate this further, let’s enter the mind of a PPI seller and the factors that are influencing their consequential reaction (their pros and cons list) to this non-emotional dilemma.

They might say: "Competition has increased, forcing down profit margins, sales volumes, and my pay. Pushing PPI earns me money. The impact on my buyer is negligible; it’s not a lot of money for them and they mostly won’t even use their insurance policy anyway.

"What of the regulator? We are selling to fewer people and the firm makes less on every sale, so any punishments, if we get caught, will be much smaller than when we dominated the market."

Similar thinking happens all the way up the management chain, from the PPI seller right up to the executive suite.

The inverse reasoning would happen in a setting in which firms retreat to a niche in the face of increased competition. Margins would increase (though volumes would fall), reducing the need for misconduct. Penalties would also fall, but not at the same rapid rate as in a mass market because each sale is more valuable. This tilts the decision in favour of penalties and ethics, and away from a motive driven by profit.

The current UK mortgage market has worrying parallels with PPI. Post-2008 ringfencing rules, which only allow banks to invest in certain asset classes, have caused a rush towards lending on properties. Mortgage margins are coming down to levels last seen at the height of PPI selling. Couple this with a recent stamp duty holiday and talk of the UK government underwriting mortgages, that’s a lot of extra competition. If there is no misconduct it will be a triumph of regulation.

Taking neuroscience into account gives regulators a fresh insight into where fraud might occur. It also gives them the opportunity to prevent it by manipulating our ethical response to dilemmas.

For example, creating a professional body for mortgage sellers would create sanctions for misconduct, such as being struck off. This transforms a non-emotional moral dilemma into something emotional (rule-based with big upfront costs). The model shows that a mass market with many small competing firms will act honourably when faced with an emotional dilemma.

We’ve only looked at the examples of PPI and mortgages (small competing firms, in a mass market, and non-emotional). However, the model also reveals other areas of concern such as bribery in the bond-issuance market (oligopoly, niche, emotional) which are also identified as being vulnerable. Its potential is vast.

In regulating a market, we not only need to use our heads but consider what’s going on inside them too.

John Thanassoulis is Professor of Financial Economics and a Panel Member for the UK Competition and Markets Authority. He teaches Financial Conduct, Leadership and Ethics on the MSc Global Central Banking and Financial Regulation.

Find out more about behavioural science on the MSc Global Central Banking and Financial Regulation or download a brochure.

For more articles on Finance sign up to Core Insights here.