'In the middle of a war, you value friendships forged in lecture halls'

Children receiving life-saving chemotherapy in basements because hospital wards are no longer safe. Babies born amid the rubble of bombed out streets. Families grieving the loss of several generations. Heartbreaking stories of civilians suffering in Ukraine have horrified the world.

The war has directly affected members of the WBS family, staff and students alike.

When Russia invaded, IT entrepreneur Shamil Malachiyev needed to evacuate his family from their home in the village of Bashtanka in the Mykolayiv region, which has since become a battlefield.

As luck would have it, Shamil forged a friendship with fellow Ukrainian student Bo Kelestyn while they were studying for postgraduate degrees at WBS and was able to ask her for help.

Shamil said: “When I realised that the Russian forces were closing in on the southern regions of Ukraine, I knew I had to get my family as far west as possible.

“I remembered that Bo’s family lives in the West and thought she might know places we could find accommodation to rent.

"In these tough times you understand the meaning of real friendships, forged in the lecture halls of WBS. ”

Bo, who recently returned to WBS as an Associate Professor in the Information Systems and Management Group, said: “During the first week of the war, Shamil sent me a Google Maps screenshot with a red circle around the area he was looking at.

“My hometown was pretty much in the middle of it and my mum and two of my sisters happened to be out of the country when the war started, so our family home was empty.

“I immediately suggested they come and stay at ours. Another of my sisters and two brothers-in-law, who are all still in Ukraine, spent a day getting things ready to welcome Shamil's family.

“None of us had much time to think, we all did what we could. Despite everything they have been through, Shamil’s family have been very generous. My brother-in-law, who pops in to see them all the time, never leaves empty-handed or with an empty stomach.” 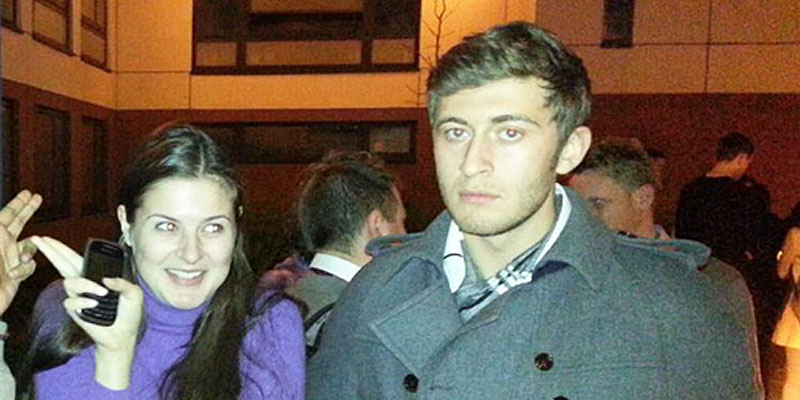 Bo Kelestyn and Shamil Malachiyev while studying together at WBS.

Having returned to Ukraine after his studies, Shamil founded his own web development company, FluidWeb, and helped grow the family business producing wheat, flour, pasta, and biscuits.

The firms prospered and Shamil was about to launch a new company Noolabs, producing dietary supplements for enhanced brain activity, before the invasion forced him to shelve his plans.

He said: “War changed everything. I have moved half of my IT company to western Ukraine, with the other half helping people in the Mykolayiv region in the army or as Red Cross volunteers.

“With the flour mill, we pivoted towards ensuring those in need in the city and the army have enough supplies to keep fighting. We recently sent seven tonnes of pasta to the Kyiv region in one day to feed people who survived the Bucha and Irpen massacres. With many food manufacturers destroyed, we continue to do when we can for those who need us most.”

The two families are also working together to transport humanitarian aid from Poland to war-torn regions of Ukraine, as well as repurposing a sports equipment business to make beds for refugees seeking temporary accommodation in different parts of the country.

Meanwhile, tech entrepreneur Artem Yaremchuk has set his sights on the education and careers of children affected by the war.

Artem spent most of his life in Kyiv before embarking on the Warwick MBA. His family and friends are still in Ukraine, deployed in the military or working as volunteers.

As a father of two, Artem is acutely aware of the devastating impact of the war on Ukrainian children whose education had already been disrupted by the Covid-19 pandemic.

He said: “In Ukraine, hundreds of schools and kindergartens have been destroyed and many families don’t have access to schools nearby or don’t have funds to pay for their children’s education.

“The school year ends in three months and it’s not clear how thousands of Ukrainian children will graduate nor how this will impact their future education and career.”

Artem has joined entrepreneurs, managers, and investors as part of Nova Ukraine. The not-for-profit organisation focuses on raising money for humanitarian support in Ukraine. They have already raised $20 million for those in the greatest need.

Artem is now fundraising to support Ukrainian children who have lost their schools.

He said: “We aim to raise £85,000, which will pay for online learning for at least 1,000 children for the rest of the school year so they can successfully finish their studies and receive their diploma.”

Vice Chancellor, Professor Stuart Croft, asked the University of Warwick community to stand with Ukraine in his statement in February. As a charity and a University of Sanctuary, Warwick is committed to building a welcoming culture, especially for those fleeing war and persecution.

That includes supporting academics and students with access to hardship funds, scholarships and fellowships, and working closely with the Council for At-Risk Academics. The University is also bolstering its support for students who cannot return home at the end of the academic year.

Many students, staff, and alumni have come together to offer their support. Find out more about the University of Warwick’s Student Support Fund.

Latest research and expertise - Receive our CORE Insights email
Related Courses
Statement on the situation in Ukraine Will Russia turn off gas supplies to Europe if it invades Ukraine?
Leadership
Extinction Rebellion: Is it possible to have a leaderless organisation?
Marianna Fotaki has delved into green activist Extinction Rebellion to look at the structure and organisation of the controversial group.
School News
WBS sponsors Rising Star Awards to back female achievement
It is time to cast your nominations for WeAreTheCity’s Rising Star Awards of 2023, the scheme that focuses on the achievements of women in business.
School News
First cohort from the Bank of England Master's programme graduate
The ground-breaking MSc Global Central Banking and Financial Regulation course saw its first cohort graduate with partners Bank of England in attendance.
Healthcare and Wellbeing,Finance and Markets,Leadership,Sustainability,Digital Innovation and Entrepreneurship,Strategy and Organisational Change,Future of Work,Decision-making and Analytics